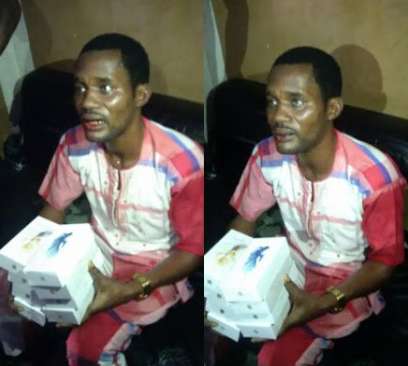 One month after the jaw breaking scandal stirred up after the arrest of Seun Egbegbe for the theft of nine iPhones, news reports have revealed that the filmmaker has fled Nigeria for Malaysia.

Daily Post reports that the Toyin Aimakhu‘s ex-lover jetted out to Malaysia and has been unreachable following fresh allegations of an alleged $3000 fraud revealed by a MultiChoice dealer in Ibadan.

According to the reports, the Ebony Productions CEO left the country for Malaysia, in a bid to escape the controversies which have trailed him following the phone theft.

A source reportedly revealed to Encomium magazine that, “Seun Egbegbe is not in town now. I learnt he has gone to Malaysia where he will sojourn till February 8, 2017, when his case will be heard at Ikeja Magistrate Court, Lagos.”

Egbegbe who was arrested and charged to an Ikeja Magistrates’ Court for theft, was reportedly granted bail in the sum of N1 million.

Meanwhile, a MultiChoice dealer has revealed that Egbegbe committed fraud to the tune of $3000 at his outlet, and left him to take the fall for it.

The dealer identified as Semiu, also alleged that Aimakhu, paid good money to make that scandal go away.

So far, the Nollywood actress has remained mum on both allegations, preferring to stay out of it as she just might have had enough of controversies for this year.