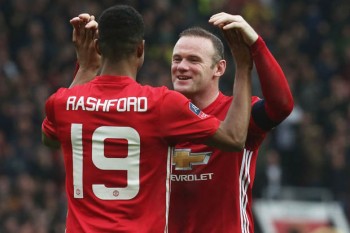 Saturday saw the spotlight fall on United greats past and present as Rooney netted his 249th goal for the club in the FA Cup match against Reading, equalling the record set by the legendary Charlton, who was watching from the main stand.

Mourinho believes it will be tough to get near the record mark in the modern era but has seen enough in 19-year-old Rashford to think he could go close.

“I don’t know the distances, really, but I think the ones that are close are players that left United already,” the Portuguese said.

“So, especially in modern football I see it is really difficult. I don’t know, who knows?

“Marcus, he is 19. If he plays Man United until the end of his career, maybe Marcus can do it but Rooney scored a lot of goals.”

Rashford only made his debut last February but has netted 14 times for United. There had been a slump of late but he scored twice on his return to the starting line-up in Saturday’s 4-0 win – his first goals in 18 United matches.

“I spoke with him at half-time,” Mourinho said. “I told him that I don’t care with the goals he missed in the first half because he had big responsibility in the way we were breaking their defensive line.

“He was playing so well for us. One more goal, one less goal – it doesn’t change. But obviously for an attacking player to score a goal means happiness, means confidence, so it was good for him.”

Rooney’s 249th goal on his 543rd competitive appearance for United was a historic moment that led onlookers to wonder how high a bar he could set.

The 31-year-old recently pointed out that he was a long way from finished.

MRS ENDOWED! Pictures Of This Busty Nollywood Actress Is Currently Causing A Stir On Instagram