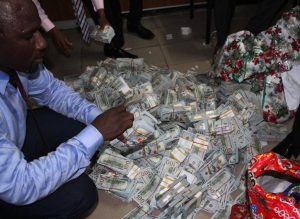 According to the lawyer of the whistle-blower, Yakubu Galadima, who informed EFCC of the $43m, N23.2m and £27,800 (N13bn) recovered from an apartment in Ikoyi, his client will not accept anything less than the 5% commission he was promised by the government.

Prof. Bolaji Owasanoye, the Secretary of the Presidential Advisory Committee Against Corruption, at an event on Thursday titled, ‘Tracking Noxious Funds’, organised by Kent University Law School and Human and Environmental Development Agency, had said any whistle-blower who helped the government recover funds over N1bn would receive less than five per cent commission.

Owasanoye, who was part of the team that drafted the whistle-blower policy had previously said:

“If you blow the whistle and the government recovers cash, you are entitled to between 2.5 per cent and five per cent.”

“If the recovery is between N500m and N1bn, you get three to four per cent (commission). If it is N1bn and above, it is 2.5 per cent. Indeed, there is a clause that we included in the policy to say that the government may determine the amount to be awarded based on other criteria provided that the amount to be awarded doesn’t exceed five per cent. In other words, the government may actually pay less than 2.5 per cent but nobody can be paid more than five per cent.”

However, the Ikoyi whistle-blower’s lawyer said his client is not interested in this policy. Adding that he won’t accept anything less than five per cent, what he was initially promised.

Galadima said last week that his client was expecting a commission of N860m from the Federal Government, not N325m based on the amount EFCC recovered at the Ikoyi apartment. Adding that the commission should be paid based on the exchange rate at the time the money was recovered.

Some Interesting Pictures From Singer Oritsefemi’s wedding #ON2017

Dr. Njakiri Damages Says Atiku Abubakar, 71, Has No Chance Of Becoming The Next President Of Nigeria

“I Have Not Violated Code Of Ethics Of AfDB” –…