Teacher Beaten To Death For Flogging Student In Anambra State 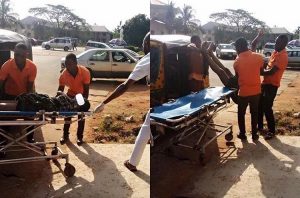 Odilinye Rita, a teacher at Starlight Seconday School, Ogidi, Anambra State, has been beaten to death by the parents of one Okafor Chinaza, a 14-year-old student she flogged.

According to journalist Eze Amadi, the incident happened on Wednesday, 29th of November, 2017. Chinaza was allegedly flogged by Rita for not sweeping the class according to the roster.

According to fellow classmates, when the teacher questioned Chinaza on why she didn’t sweep, she responded with insults. She then told her to kneel down, but she refused, prompting the teacher to annoyingly flog her.

The student later ran home and returned with her mom and uncle.

According to the proprietress: “I was in my office with one of my teachers when she came in. I pleaded with them to allow the school look into the issue with diplomacy, as revenge won’t yield needed result. She accepted to forget and forgive as I promised her that we will handle the case.”

However, as the parents were leaving, they saw the teacher coming back from the private teachers meeting she had gone to. The mother was said to have rushed her with the stick she came with.

After a while, the teacher collapsed and was rushed to Iyi-Enu Hospital, Ogidi, where the doctor confirmed her dead. Currently, the parents and the student are being held at the police in Ogidi police station.”

Human Right Lawyer, Femi Falana, Files N100m Lawsuit Against FG After Breaking His Leg In A Manhole He Fell Into In Abuja