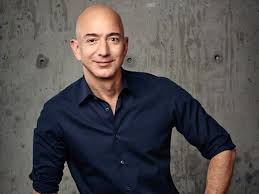 The company began as an Internet merchant of books and expanded to a wide variety of products and services, most recently video and audio streaming.

Bezos made $6.1 billion in just five trading days in 2018 and is now worth $105 billion, according to the Bloomberg Billionaires Index. His net worth reached $105.1 billion on Monday eclipsing the record previously held by Microsoft founder Bill Gates. A rise in Amazon’s share price made the New Mexico-born businessman richer by $1.4 billion on Monday, reports said. This means that in five days, he earned more than most Americans would in 5 lifetimes.

The rise in Bezos’ fortune makes him worth more than Microsoft founder Bill Gates was ever worth, Bloomberg reports. The net worth of Bezos continues to grow as shares of the online retail giant jumped 56% in 2017 and are up another 6.6% so far in 2018. Amazon continues to dominate online spending and has said that Cyber Monday 2017 was the biggest shopping day in its history.

Bear in mind though that Bill Gates has given away a lot of his fortune to charity. Gates’ current net worth is $93.3 billion and over the past 20 years he has given away stock and cash that would be worth about $60 billion today. That would put his net worth at more than $150 billion and made him richer than Bezos if he had kept his wealth to himself.

Many Feared Dead In Taraba As Herdsmen And Farmers Clash

Full Speech: ‘Your Voices Have Been Heard, We Are Responding’ – Buhari Says As…

Full Speech: ‘Your Voices Have Been Heard, We Are…