”Those Behind The Benue Massacre Will Be Fished Out And Brought To Justice”: President Buhari 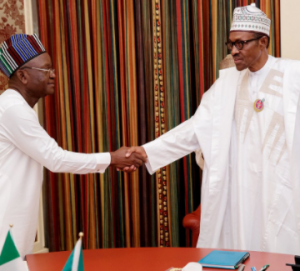 President Buhari this afternoon had a closed door meeting with Benue state governor, Samuel Ortom, over the serial herdsmen killings in the state. President Buhari told Governor Ortom that efforts are being made to fish out the attackers and bring them to justice. He also said that preventive measures are being put in place to avert future occurence.

”“I assured Governor Ortom of our total commitment to the security of lives and property in Benue and elsewhere. We have deployed additional security resources to fish out the attackers, bring them to justice, and prevent further attacks” he said via his twitter handle