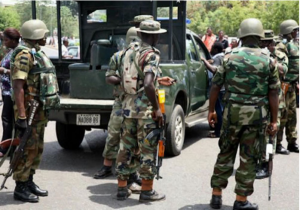 The Nigerian Army on Wednesday, January 30, said it had discovered a base used by armed militias terrorising Benue, Nasarawa and Taraba states at Tor-Dunga Town in the Katsina-Ala Local Government Area of Benue State.

The army added that it also arrested a native doctor, Tordue Gber also known by an alias, Tiv Swem, who allegedly supplied charms to the militias.

The arrest was made by troops of the 707 Special Forces Brigade, Makurdi, on Monday, who raided the base.

The military, in a release signed by the Director, Army Public Relations, Brig Gen Sani Usman, said a native doctor was arrested along with one of his accomplices, Atoo Francis.

Usman said Francis was however shot dead by the troops.

The army spokesman said, “Troops raided the shrine and arrested Gber, who acted as a spiritual adviser to the criminal militias. Gber is also an ally of the wanted notorious criminal, Akwazar Terwase (alias Gana). It will be recalled that he was declared wanted by the security agencies and has been at large since 2016.

“Preliminary investigation shows that the shrine serves as a hideout for wanted armed militias that operate in Benue, Nasarawa and Taraba states.

“The troops recovered a locally fabricated pistol, two Baretta Pistols, 11 rounds of 9mm ammunition, three motorcycles and assorted charms. Other items include warm clothing for concealing weapons, two mobile telephones and three power generators, amongst other items at the hideout.”

Is The World Really Coming To An End? Global Killer Disease Is Imminent, Experts Warn