Igwe is a radio presenter and voice over artiste popularly known for hosting “The Midday Show With Ify” on Lagos Talks 91.3. Born and raised in Nigeria, Ify attended Corona Secondary school and graduated from The University of Capecoast in Ghana with a degree in psychology,She took a break from the world of science to focus on her interest in media. One of her major goals as a broadcaster is to raise the bar for women in the broadcasting industry by empowering women through her work. 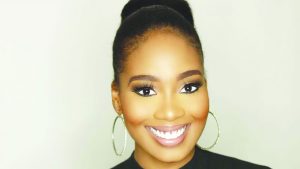 With her zeal to inspire the world, she began a project called Inspiration To Live (@inspirationtolive_ng) where she sends out a weekly podcast With inspirational words to touch lives.

She was one of the presenters for the live broadcast of the largest gospel concert in the world, “The Experience”

In her words “I seek to leave an outstanding legacy in the world and help as many women as I can, by challenging them to be more and accepting the fact that they are enough. She shares her story in this interview.

I believe everyone’s past prepares them for their future whether directly or indirectly. I would say mine was the later, certain experiences and encounters shaped my interests and led to me to pursue my current career path.

Getting into broadcasting wasn’t just about me talking or being in front of the camera, although all that is nice. There are specific areas I am passionate about that I have chosen to lend my voice to using my broadcasting platform and I believe all this was as a result of my childhood, teenage years and part of my adult years.

I was born on the 11th of November, I’m the last born of 5 children, a graduate of psychology from the University of Cape Coast and a food lover.I grew up enjoying the best of both worlds, starting from a not so silver spoon to a beautiful life my parents worked so hard for my siblings and I to have.

I call myself a creative because I’m constantly creating and looking for avenues to create and my creativity isn’t limited to a particular area, it cuts across different spheres.

My satisfaction in life comes from the joy of others and I always strive to ensure that I’m a source of joy because that’s what my heart feeds off.

Taking a break from science to focus on Media
I have a couple of interests and I believe they all have their set times to be explored.

The four years I spent in Cape Coast, Ghana was to focus on my interest in psychology afterwards I delved into the broadcasting path because of my interest in it and very soon I will be exploring others interests.

Now this is not to say that I’d abandon psychology and broadcasting, rather eventually in the nearest future I’d strike a balance between these interests and figure out how to bring them under one umbrella to function simultaneously.

Trying to keep my head up in a competitive industry
The first challenge was knowing that I had a huge responsibility on my shoulders speaking to people everyday and understanding that my words could change the lives of people.

This made me question if I was cut out for such a huge responsibility, however as time went by I was able to grow in confidence and strength.

Another challenge was that this industry is quite saturated and competitive which is not so much of a negative thing because it constantly puts me at the edge to keep growing and improving.

Also, getting into this industry I realised that brands were more focused on working with specific personalities who had been in the industry for a while and so it was difficult for newbies like me to explore certain terrains. This actually made me understand the importance of building my brand to the very best it can be.

Motivation behind my programme “Inspiration To Live”

I’ve always had a passion for inspiring and transforming lives. There was a period I was just interning at the company which I currently work, hoping they were going to hire me however, time kept passing by and I wasn’t really getting feedback about being retained.

Due to this uncertainty, there were times I’d wake up and not be motivated to carry on because life wasn’t just going the way I wanted it to go, then I’d listen to some sermons to elevate me which helped.

So I woke up one morning thinking about other people like me that would wake up and not have the motivation to keep moving.

I started recording some inspirational words on my phone which sounded pretty nice then I decided to add some music in the background which made it even nicer.

I later spent some time on YouTube learning how to edit audio recordings in order for the podcasts to be of good quality.That’s how Inspiration To Live was birthed. Words to inspire people to live everyday.

Other project and activities?

Most of the projects I’m working on now, I can’t really say much about them but what I can say is that I’m transitioning to TV and I’d be doing that alongside my radio job.

Hmmm! My utmost desire is, changing lives for the best because I believe there is nothing more beautiful than being the reason someone’s life is transformed. I’ve received several emails and calls on air with people telling me how much of an inspiration I’ve been to them through my show. For me, that is absolutely beautiful.

Also, I had an instance where someone called my show saying that he was about to take his own life. At that moment I was in so much shock but I had to put myself together, speak to him, then called the Lagos State Emergency numbers and I also reached out to an initiative that deals with such cases. Today that man is alive, getting better and he sent me an email appreciating me for everything. To me, that was priceless.

I see my brand expanding and exploring international terrains.

Giving up isn’t an option

There were times and I’m sure there’re still times that I’d want to give up, that’s just how life is. It has its ups and downs and during those downs, one of the most common things is having those moments when something I like doing. I believe my job is pivotal in changing not just the lives of people but my country Nigeria and because of this knowledge, I know giving up is not an option. I always have to remind myself that all this is not about me, it’s much greater than me and there’s a lot of work to be done.

One key thing that I never try to do is to do it on my own because I know God brought me here and rather than lean on my own strength and understanding which will eventually fail me, I lean on Him because I know He’d always see me through.

Who and what inspires me to be better
It’s the lives that need to be transformed, it’s the current state of our country and it’s the knowledge of greater possibilities that inspire me.

Knowing that people depend on the words that I speak on air to navigate their way through their businesses, relationships, spirituality and life in general, that keeps me pushing to better myself. Also knowing that there is so much more that can be achieved, and with me being an inquisitive young woman, I keep pushing the mark to see how far I can go and how better I can become.

I am a Woman of Rubies
It’s those experiences that have broken me, built me and transformed me into the woman I am today that seeks to bring hope, Love, beauty and change to my generation.

It’s the time I’ve spent in God’s presence and listening to all He says I am and all He has called me to be that has made me realise all that I have within me and as a result, I have become the woman I am today.

So, My Experiences + My God have made me this woman!

Final word for young women all over the world

Listen, you are so much more than your past and your current status.

Always remember that there was a specific purpose in which you were brought into this earth for, never stop building until that purpose comes to fruition.

A wise woman once said; “The goal is not to live forever but to create something that will”.

5 Awesome Wedding Gift Ideas For Your Loved Ones

Buy/Sell Bitcoin At The Best Rate Possible From TJ Concept