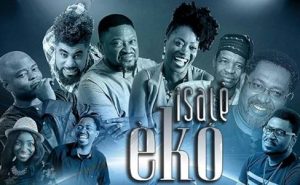 Isale Eko the massively popular play coming up this June at the prestigious Muson Centre is already exciting very major brands, reports have shown. Already, major Brands like Wema Bank who are the Main bankers to the production, Century Group, Amstel Malt, ARM Investment Managers, AXAMansard and The NOOK a recently debuted lifestyle platform have all jumped on the wagon with many more showing very enthusiastic interest
Isale Eko in its last showing captured the imagination of the theatre going crowd with its scintillating performances displaying some of the most electrifying song and dance sequences ever seen on Nigerian stages.
According to its Executive Producer, Mr. Edgar Joseph who is also an Investment Banker, Isale Eko not only touches the very essence of our heritage as Nigerians but also provides a strong platform for social cohesion hence its popularity with these brands.
He went on to announce that this time, the play would witness an exciting twist that would see its main character go into a trance in 14th century Lagos and emerge in 2018 Lagos touring very strategic socio economic points with a view of highlighting socio-economic opportunities which makes Lagos the economic melting pot that it is today.
Finally Edgar went on to announce that the sultry Diva Yinka Davies will debut the Isale Eko theme song IYE at the Command performance of the three day extravaganza
Starring legendary Actor and Presenter Yemi Shodimu, who would be supported by up and coming Act Wunmi Dada and former Tinsel Star, Data Jaja and introducing Chantal Edgar in a major turn out, Isale Eko is set to thrill not only Lagosian but the global audience who would be streaming in live.

Plus TV Africa Launches On DSTV