Drama Brewing between Teddy A And His Babymama Over Bambam? Here’s The Full Gist…. 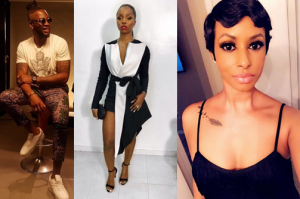 It’s not news that ex-Big Brother Naija 3 housemates, Teddy A and Bambam became a romantic item in the house and continued after their eviction.

Their relationship became even more clear when Teddy with his family threw her a surprise birthday party. Their fans of course tweeted ‘Goals’ and celebrated the pair ‘BamTeddy’.

Now while in the house, Teddy revealed to Bambam that he had a son with his ex, Layla, but they were no longer romantically involved as she supposedly moved on and got married.

He also claimed to have a girlfriend whose identity remains unknown, as he never acknowledged her during media rounds after his eviction.

But the drama had already begun! Teddy’s babymama, Layla took to twitter during the show to clarify that she wasn’t married but single. No one however paid attention to this..

It now appears that she’s dropping subtle shade at Bambam for trying ‘too hard’ in her new found relationship with her baby daddy. Why? Bam wished their son a happy birthday last night.

Layla’s shade might have gotten Teddy to indirectly react via Snapchat. Or could he be referring to something else? See below. 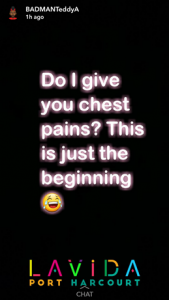 NAFDAC Seals Off Emzor Pharmaceuticals, Others Over Codeine Abuse

Wife Thanks Husband For Donating His Liver To Her

BBNaija’s Tacha Gets N6M, A Bus And Dispatch Bikes…