Police Arrest Birthday Girl For Inviting Hoodlums To Her Party

A woman, Zainab Olatunji, has been arrested by the police for alleged conspiracy and malicious damage of two vehicles.

PUNCH Metro gathered that Olatunji on June 3, 2018, celebrated her birthday in the Papa Ashafa, Agege area of Lagos State. 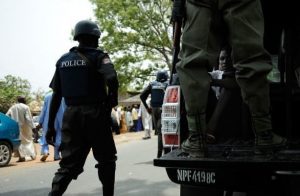 Some hoodlums, who were allegedly invited by the 21-year-old, were said to have smoked hemp freely, as they wielded different kinds of weapons during the celebration.

The party was midway when there was a disagreement among the guests, which reportedly degenerated into a fight.

One of the affected car owners, Sulaiman Fajumobi, said the party was attended by over 50 guests, adding that most of them drank to stupor.

“When they had their disagreement, they started threatening passersby with machetes as they burst out into the street to continue their fight. We all stayed indoors to keep safe.

“After they left and the dust settled, I came out of my house only to discover that the windscreen of my car had been shattered by the hoodlums,” he said.

Olatunji, who was arrested for the damage after the hoodlums fled, was arraigned on Monday before an Ogba Magistrate’s Court.

She was charged with conspiracy and malicious damage.

The police prosecutor of Court 20 said the offences contravened sections 411 and 168(d) of the Criminal Law of Lagos State, 2015.

The charges read in part, “That you, Zainab Olatunji, and others now at large, on June 3, 2018, around 8pm, at Olumo Street, Dopemu, Agege, in Lagos Magisterial District, did conspire among yourselves to commit a felony, to wit; malicious damage.

“That you, Zainab Olatunji, did conduct yourself in a manner likely to cause breach of peace by bringing boys that smoked Indian hemp and displayed dangerous weapons in the name of celebrating your birthday and in the process, the boys you brought fought and broke the windscreen of a Toyota Sienna.

“That you, Zainab Olatunji, did conduct yourself in a manner likely to cause breach of peace by bringing boys that smoked hemp and displayed  weapons in the name of celebrating your birthday and in the process, the boys you brought fought and broke the windscreen of a Toyota Rav 4.”

The defendant pleaded not guilty to the charge.

The presiding magistrate, A.K. Dosumu, admitted her to bail in the sum of N30,000, with two sureties each in like sum.

The magistrate said the sureties should be gainfully employed with evidence of two years’ tax payment to the Lagos State Government.