A former Minister of Special Duties and Inter-Governmental Relations, and Senior Advocate of Nigeria (SAN), Alhaji Tanimu Turaki, (SAN), has vowed to unseat President Muhammadu Buhari in the forthcoming 2019 Presidential elections, if given the ticket of the Peoples Democratic Party (PDP). 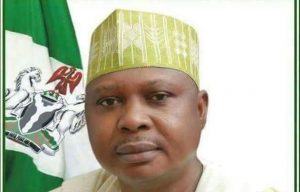 Turaki spoke on Wednesday during a media chat with journalists, added that Nigerians were tricked into entering what he referred to as a “one-chance” vehicle in 2015 by the All Progressive Congress.

Speaking on why he is running for the Presidency in 2019, The 61 years old seasoned politician and administrator said: “If you are not happy with what is happening, you get involved and change the system.”

He posited that the All Progressives Congress (APC) has destroyed the nation’s values and caused division among Nigerians.

“The APC-led federal government has destroyed all the values we cherish as a people. Since the amalgamation of the Northern and Southern protectorates, Nigerians have never been in this situation that they now find themselves.

“There is serious division in the polity and this is because we have a federal government that openly discriminates against the citizens of this country.

“We will look into the issue of our togetherness as a people and strive towards uniting Nigerians. We will ensure equal access to opportunities to all citizens without discrimination,” he said.

Turaki, who chaired the committee that negotiated with Boko Haram insurgents during the Goodluck Jonathan administration, stressed that, apart from being a goal getter, he has never been been involved in any corrupt practices despite supervising projects involving many billions of naira, including the Goodluck-Sambo 2015 presidential campaign.

“I am sufficiently informed and experienced to provide the solution to Nigeria’s problems. I am a bridge builder and I have the integrity, knowledge, good health and dynamism to defeat President Muhammadu Buhari. I can lead the crusade to lead my party to victory and save Nigeria from the precipice,” he said.

The presidential aspirant declared support for restructuring and vowed “to take bold steps in this regard.” He also promised to improve the country’s security and economy and to also ensure justice for all parts of the country.

Turaki was accompanied to Lagos by several lieutenants and PDP chieftains, among them are the Director-General of his Campaign Organisation, Mr. Boni Haruna, a two-time Governor of Adamawa State, Director of Media for his Presidential Campaign, who is also a seasoned journalist, Mr Sola Atere. Also the PDP Governorship aspirant in Kwara State who’s also an ex-minister of National Planning, Professor Abubakar Sulaiman.

A former Minister of Special Duties and Inter-Governmental Relations, Alhaji Tanimu Turaki, (SAN), has said that he is better educated than President Muhammadu Buhari and therefore in a better position to lead the country in 2019.

Turaki, who is a presidential aspirant on the platform of the Peoples Democratic Party, spoke in Abuja on Monday when he visited the national headquarters of the party.

He was at the headquarters of the party to intimate to members of its National Working Committee his aspiration.

He said he could match President Buhari’s much-talked-about integrity, adding that he had what the President didn’t have.

The former minister said, “I can match President Buhari’s integrity for integrity and I have what he does not have: I have education, I have the knowledge, I have the fear of God, which he doesn’t have.

“Even if you have a good sales team, you need a good product. And I am that product. I can assure you that I am not made in ‘Taiwan’.

“Nigerians are crying, weeping and dying and they believe that the only party that can save them from this malady and psychological trauma is the PDP.”

While reminding members of the NWC of the great task ahead, Turaki said the PDP needed a good product to confront the ruling party in the Presidential election.

According to him, “Since 2015 that we lost the election, many things have changed. It is no longer about the platform alone but also about the candidate.

“We must be able to come up with a candidate that has the strength of character to wrestle Buhari and pin him to the ground (should he emerge APC Presidential candidate).”

On the security situation in the country, Turaki blamed Buhari’s government for declaring victory over the insurgents; a development he said made the people take government’s position hook, line and sinker.

He said, “APC has lied over the flushing and defeat of insurgents and when they (people) relax, they are picked up in soft targets and killed by insurgents,” adding that until killers were made to face the wrath of the law, the reign of terror would not abate.