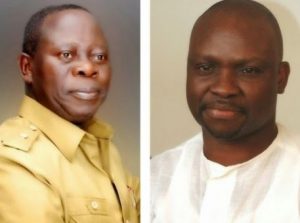 “Fayose abuses everybody. He is a typical armed robber who diverts attention of the police in order to escape,’’ Oshiomhole said today at the grand rally for Kayode Feyemi, the APC governorship candidate of APC.

He said Fayose‘s payment of road transport workers to park their vehicles to make it difficult for people to attend APC’s rally, is an indication that he has resorted to primitive tactics.

“Fayose also gave an unlawful order asking all shops and markets to close today. Has also called workers to monitor workers’ vote to know who is voting for APC. The fighting spirit of Ekiti people overcame all the obstacles created by a man” he added.

No Level Of Gang-Up Can Distract This Administration – APC

‘People Think I Am Down, But I Am Not’ – Oshiomole…