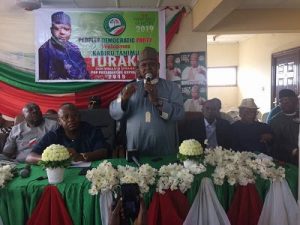 Frontline PDP Presidential Aspirant, Kabiru Tanimu Turaki, SAN and chairman Edo State chapter of the party, Chief Dan Orbih have faulted the statement credited to President Muhammadu Buhari that his APC government “will not sacrifice national security for the rule of law.”

They both spoke when the presidential aspirant visited the PDP Edo state secretariat in Benin on Monday as part of his consultations with stakeholders ahead of the party’s national convention.

Turaki who is a Senior Advocate of Nigeria argued that the position of the president is illegal on the strength of the fact that it is inconsistent with the provisions of the constitution which is the supreme law of the land.

Besides, Turaki says that there is danger in the position of President Buhari because his government and his party, the APC may have a sinister motive of clamping on the opposition under the guise of national security as the country heads to the 2019 general elections.

He lamented that the president is attempting to interpret the law illegally just as he and his party have been equating national interest with either personal interest or the interest of their party as they desperately attempt to cling to power.