Bill Cosby has been sentenced to three to 10 years in state prison for his 2004 assault of Andrea Constand. 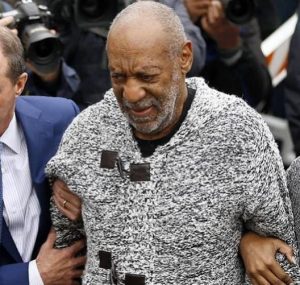 A Montgomery County judge, Steven O’Neill ruled today that Cosby would serve “no less than three and no more than 10 years” in state prison, in addition to levying a $25,000 fine and requiring the convicted sex offender to pay court costs.

“It is time for justice. Mr. Cosby, this has all circled back to you. The time has come,” O’Neill said. He quoted from Constand’s own statement to the court, in which she said Cosby took her “beautiful, young spirit and crushed it.”

The sentence is in line with the one sought by District Attorney Kevin Steele, who asked O’Neill to impose a prison term of five to 10 years after Cosby’s April conviction on charges he drugged and sexually assaulted Constand in 2004. A defense attorney had asked that Cosby, 81, be spared a prison term, citing his age and frailty.

O’Neill’s pronouncement came after a protracted two-day hearing at the Montgomery County Courthouse that featured testimony from Constand, her family and psychologists. Cosby’s sentence came just hours after O’Neill ruled that the convicted comedian is a “sexually violent predator,“ a designation that includes registration as a sex offender and lifelong notification and counseling requirements.

The judge heard final prosecution and defense remarks during the morning session before he pronounced sentence. “This should be a state-prison sentence and this should be a sentence that happens today,” Steele told the judge.  Before the sentencing hearing, a Pennsylvania state board recommended that Cosby be designated a “sexually violent predator,”  a classification that mandates registration as a  sex offender, community notification of his whereabouts and lifelong counseling.