The Independent National Electoral Commission declared the candidate of the All Progressives Congress, Gboyega Oyetola, as the Governor-elect of Osun State. 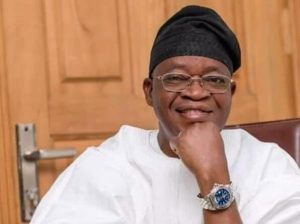 The rerun of the Osun State governorship election was held in seven polling units across four council areas on Thursday with the candidate of the All Progressives Congress, Gboyega Oyetola, beating the Peoples Democratic Party candidate, Ademola Adeleke.

The returning officer, Prof. Joseph Fuwape, declared that the APC candidate, Oyetola, won the governorship election by scoring a total number of 255,505 votes while Adeleke of the PDP polled 255,023 votes.

This was, however, met with protests by Adeleke, the PDP, and the Coalition of United Political Parties, among others.

Adeleke had won the main election on Saturday with 353 votes after polling 254,698 against Oyetola’s 254,345. On Thursday, both candidates relied on 2,637 votes in the seven units where the Independent National Electoral Commission had declared rerun to win the final contest.

In the run-up to the rerun of the election, the PDP alleged that INEC shortchanged its candidate in some of the council areas by announcing figures that were lower than what Adeleke actually scored.

It claimed that the actual margin of the win against Oyetola in the first election was 4,740 and not 353. The party said that INEC added 2,000 votes to what the APC polled in Osogbo and 1,387 to what it scored in Olorunda. The party also alleged that 1,000 votes were deducted from what Adeleke scored in the Ayedaade council area.

The candidate of the Social Democratic Party, Iyiola Omisore, who came a distant third in the Saturday’s election, however, became an important element in the Thursday’s rerun because some of the polling units fell under the area of his strength. He was visited by a high powered Federal Government delegation which included the APC chairman, Adams Oshiomhole; Ogun State Governor Ibikunle Amosun; his Oyo State counterpart, Abiola Ajimobi; Ekiti State Governor-elect, Kayode Fayemi; and Minister of Information, Lai Mohammed.

Although he also met some leaders of the PDP, which included the party’s presidential aspirants, Bukola Saraki, and Atiku Abubakar, Omisore caved in under the FG pressure as he announced that he would support the APC in the rerun.

In areas where the rerun was held in Ife-South and Ife-North, PDP supporters alleged that they were barred by thugs from reaching the polling units to cast their votes for Adeleke. They also alleged that police watched as they were beaten by the thugs, adding that the result of the election did not reflect the wish of the electorate.

It was gathered that voters were registered by an agent at a mud house behind the polling area and given what was termed agreement fee before voting and another amount after showing evidence of voting. The evidence was usually the ink on the thumbnail. It was also observed that the majority of the people at the polling unit, except journalists, observers and security men, had a common symbol of identification.

The Director of Voter Education and Publicity, INEC, Akin Ojewande, who was at the unit, said the election process was peaceful. He said that it was the choice of the PDP not to be represented at the unit.

He said, “The election is peaceful according to plan. Everybody has the right to be here or not, How would I know (why the PDP agent is not here). A party is allowed to have an agent at each polling unit. Nobody was sent away from coming here. People have been following the rule. I don’t know of other polling units.”

In Osogbo, gunshots fired by unknown people caused a commotion as the voting process was disrupted. Two persons were arrested by the police for attempting to buy votes from the electorate in the queue. A man who was alleged to be in possession of cloned Permanent Voter Cards was also whisked away by security men. An undisclosed amount of money was also found on him.