A Policeman has reportedly collapsed after he crushed a 23-year-old Okada rider, identified as Sulemana, to death on Tuesday. The incident happened yesterday in Ghana.

The police officer, who is yet to be identified, was conveying his children to school when the unfortunate incident occurred. 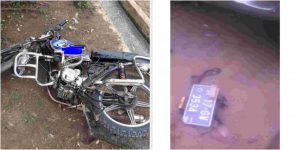 An eyewitness, Majid Amadu, explained that Sulemana was heading towards Kasoa, but immediately changed his route to avoid arrest by some three police officers who were arresting Okada rider at Mallam Junction.

Unfortunately, his motorbike collided with the oncoming police vehicle, killing him on the spot.

He said onlookers had a hectic time removing the mutilated body underneath the vehicle.

“We tried very hard before pulling him from the vehicle and the most painful aspect of it was that we did all we could to get the Mallam Police Station informed but to no avail. But some soldiers who were also stuck in traffic managed to deal with the traffic situation,” he revealed.

The police officer was also rushed to the hospital because he collapsed upon seeing the disfigured body of Sulemana.

The Police are yet to respond to the sad incident