How Sanwo-Olu wants to use Technology, Collaboration and Internet Access to Build the Future of Lagos By Funke Phillips 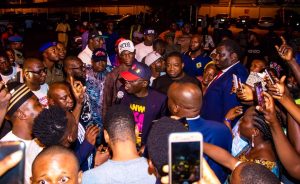 Babajide Sanwo-Olu, governorship candidate of the All Progressives Congress in Lagos State speaking at different events in Lagos talked about how technology, collaboration, and internet access are very important parts of the future of Lagos he wants to build.

Speaking at an event at the Vibranium Valley, a digital technology hub in Lagos employing over 1,500 Nigerians with a 5 years plan of employing 45,000 people, he said;

“Technology is changing the way we live, work and socialize. Social and governance problems are also solved with technological innovations especially in a city-state such as Lagos with a Gross Domestic Product of more than $136b dollars. A huge investment in technology and the creation of expansive learning facilities will help us reach the Lagos we want faster”.

According to the World Economic Forum, by 2030, one in five people will be African. Combining the continent’s soaring population with technology, improvements in infrastructure, health and education, Africa can become the next century’s economic growth powerhouse.

Lagos as one of the fastest growing African city-states in the world and a GDP more than many countries has a key role to play in helping Africa become the economic growth powerhouse, and only leaders with the right vision, know-how and willpower can put in place the structures that are required to accelerate this growth.

Technology and the Future of Lagos

A visionary leader selects the necessary resources required for the journey long before the journey begins and Sanwo-Olu has taken such a step with the selection of Dr. Kadri Obafemi Hamzat, a man who has driven the development of complex technology systems at different levels of the private and public sectors as his running mate.

Read Also: We Will Provide Enabling Environment For Technological Growth In Lagos – Sanwo-Olu

Speaking at an event in Lagos this week, he went on to emphasise his stance by first making a pledge to provide institutional and infrastructural support for the growth and development of the technology sector in the State if elected as Governor in 2019.

‘‘I’m aware that technology is the oil of today. Some ten years ago, the richest companies in the world were oil and energy giants, but the tide has changed. What we have today are technology companies dominating the global economic space. With technology, transparency and accountability in government become easier and possible. Technological innovations are helping social enterprise address social problems. Tech is accelerating SME evolutions and the impact of this is positive on the economy, which gives everyone a share of the prosperity created by this system,” he said.

Collaboration and The Future of Lagos

Collaboration is a very important part of the future of Lagos, and past governors of Lagos have demonstrated the importance of collaboration with different Public-Private Partnership projects that have made the lives of the citizens and residents of Lagos easier.

Beyond collaborating on that level, Babajide Sanwo-Olu at an event talked about how when elected, his government would partner with the private sector in education, health, security, and transportation to solve social issues, create employment opportunities and support entrepreneurship.

On November 11th, 2018, Babajide Sanwo-Olu at the Leisure Mall in Surulere, Lagos launched the “Sanwo Free WiFi” initiative, that will over the next couple of weeks be launched in other parts of the state.

Internet access is a big leveler and Mr. Sanwo Olu has demonstrated his understanding of the key part it has to play in closing the gap between Lagos and the rest of the world.

There are so many big ideas in Lagos, almost as much as in Silicon Valley, but a major differentiating factor is access to the Internet and the lack of adequate infrastructure to aid software development.

Lagos is the Silicon Valley of Nigeria because we have the largest cluster of technology hubs. Lagos as a state has about 28 hubs while the entire country of South Africa has 59 hubs. Babajide Sanwo-Olu understands how important Lagos is in the plan for tech advancement in Africa and knows that the sheer amount of talent breeding in hubs like CcHub, iDEA hub, Wennovation Hub, Leadpath Nigeria, Vibranium Valley, Zone Tech Park and even our Ikeja Computer Village just to mention a few needs to be harnessed properly.

He has promised that his administration will listen, get input and put forth customised solutions. His support for the tech industry is absolute because it is an extremely vital part of our economy.

The Future of Lagos is now. Babajide Sanwo-Olu is now and the future.

Why We Are Bringing Back Diezani For Trial – EFCC

US Is ‘Looking At’ Banning TikTok, Other Chinese Apps Over…