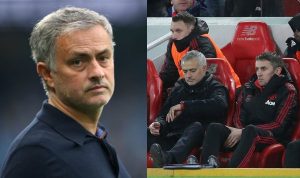 Manchester United has sacked José Mourinho following Sunday’s defeat at Liverpool, ending a tenure that began in May 2016.

A poor start to the Premier League season has seen United slip 19 points behind the leaders, Liverpool, and fall off the pace in the hunt for a top-four place. They have won only once in six league matches, drawing during that sequence with struggling Southampton and Crystal Palace.

The club issued a statement on Tuesday morning which read: “Manchester United announces that manager Jose Mourinho has left the club with immediate effect.

“The club would like to thank Jose for his work during his time at Manchester United and to wish him success in the future. A new caretaker manager will be appointed until the end of the current season, while the club conducts a thorough recruitment process for a new, full-time manager.”

Relations between the manager and the executive vice-chairman, Ed Woodward, also seemed strained after the club did not sign a central defender this summer. The club concluded that of the players in that position targeted by Mourinho whom they could potentially land, none was an upgrade on the existing squad. 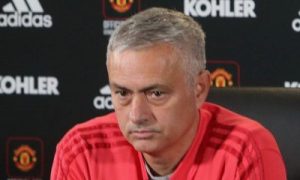 A sense of disunity at United was encapsulated when Mourinho stripped Pogba of the vice-captaincy before a Carabao Cup defeat by Derby County and confronted him at training the following morning. The manager has criticised his players’ “mental approach”, attitude and quality.

Mourinho has seemed less than happy since the buildup to the season, when he described preparations as “very bad” because many of his senior players were resting after the World Cup.

The manager demanded “respect, respect, respect” for his three Premier League titles following United’s 3-0 home defeat by Tottenham in late August but will not get a chance to add a fourth at Old Trafford.

In two full seasons at Old Trafford, Mourinho won the Europa League and League Cup (2016-17) before finishing second in the Premier League last season and reaching the FA Cup final. In that period since replacing Louis van Gaal, United’s spending stands at £364.3m on eight buys. 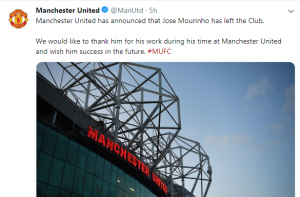