Tunde Bakare, the serving overseer of the Latter Rain Assembly, says President Muhammadu Buhari did not appoint ministers for six months because there was no money to pay them.

In an interview aired in Calgary, Canada on Tuesday and monitored by TheCable, the fiery preacher criticised Buhari’s appointment of some square pegs in round holes — stating the minister of budget, and national planning as an example. 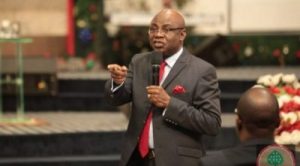 “In Nigeria, what I have found out is we put square pegs in round holes, and round pegs in square holes. For example, the person in charge of budget and planning is a lawyer,” Bakare said.

“What experience has he gotten other than federal character. You can begin to look at each ministry the same way, and the civil service that is supposed to be the memory bank of government, they’ve promoted mediocrity

“In Britain, in America, they go to Oxford, they go to Yale, they go to Harvard, and attract the best brains into civil service to formulate policies. 25 years down the road, we take the relics of society, the dropouts and we bring them in, and we expect to outperform those who have invested in those critical sectors of human capital development.

“What percentage of our annual budget goes into education, and what percentage has gone into grass cutting and cutlery? When it was made public that there were no sufficient drugs in the Aso Villa clinic, the nation should have known where their health is.”

Bakare said that former president Olusegun Obasanjo had the best cabinet, with the best and brightest minds from across the world, adding that Buhari has not been able to do same because of his political party.

“The allegations by the Nigerian public is that those around the president are also stealing, and some names have been mentioned. You cannot be a clean man surrounded by rogues, if you don’t deal with those rogues, they would colour you with the same tar,” Bakare added.

“Development under President Buhari Buhari has been slow because as he said, he inherited an empty treasury. For six months, he could not appoint ministers because there was no money to pay them, and little by little, thank God, oil picked up.

“But a person like Obasanjo will now attack him and say, rightly, the price of oil had fallen completely and I met an empty treasury but I didn’t give excuses, I worked.

“But the difference is this, Obasanjo assembled the best, the brightest from across the nations of the earth, economists that knew their onions, to begin to help steer the affairs of the nation, and that is less seen in this administration.”

Bakare said the difference between what Obasanjo did and what Buhari is doing is that the former did it under one party, the People Democratic Party, while Buhari is doing his under the All Progressives Congress, which he (Bakare) called a union of strange bedfellows.