Sanwo-Olu And ‘The Belle’ At The Night Shift Coliseum

On Sunday the 27th day of of January, I attended the Grand House Reception, GHR, held in honour of Lagos State APC Gubernatorial candidate Babajide Olusola Sanwo-Olu at the Niteshift Coliseum in Lagos.

The event which started at 6pm was attended by renown Entertainers, Politicians, Policy makers, Captains of industry etc. It kicked off with refreshments on the red carpet, interviews and phatic greetings amongst old friends and acquaintances. At about 7pm, the guest of honour Babajide Olusola Sanwo-Olu (herein after referred to as BOS) arrived. He joined the guests on the red carpet and spent another 30 minutes exchanging pleasantries. By this time I had pleaded with the security at the door to let me into the ground floor of the main hall because my feet hurt really bad, and it was unbelievably stuffy on the red carpet. So I sat inside on a marble pavement where I was joined by veteran actor Taiwo Obileye and two other elderly people who were equally exhausted from the red carpet activity. From this vantage point I observed those coming and going into the rest room(the bouncer only allowed people to come in for this reason), and the super crowded red carpet.

Soon, it was time to go upstairs to the main hall of the Coliseum. Thanks to my early entry, I was able to enter in good time and get good seats for my friends and I in the main hall. 5 minutes later guests where asked to give a standing ovation for the Guest of honour BOS as he arrived and made his way upstairs the platinum session with his entourage and other politicians.

Sanwoolu and his style of greeting! 😩😂😂😂 You’d feel like he’s known you forever 🤣 Too real! #SanwooluGHR pic.twitter.com/kXidwECPUi

One of the things I found pretty interesting was the way BOS greeted people including me and my friends at my table as he made his way to his seat. One would think he knew most of us personally, and it was very difficult to tell those he was meeting for the first time and those he knew personally. This was my second time of seeing him closely and his warm style of greeting was pretty similar to the first meeting. So much so that one of the ladies I attended the event with  said: “compared to how he looks in his pictures he seems so friendly and young upclose. Never saw him as someone who could be this warm and friendly”. I agreed with her and told her I felt the same way when I met him the first time. But I digress, this article is not about how warm Sanwo-olu is, so read on. Lol.

The event kicked off with the national anthem and beautiful renditions from the Night Shift Coliseum band. And then the presentation of plaques to BOS and his running mate, Dr. Obafemi Hamsat by the Chief host and Guv’nor of Niteshift Coliseum, Mr. Ken Calebs-Olumese and other VIP’s. After this, came the moment everyone was waiting for, the interactive session between BOS and guests at the event. And this ladies and gentlemen is what this article is really about. It was during this interactive session that most bizarre thing I’ve ever witnessed at a public event in my 7 years as a Blogger and media person happened.

The anchor of the question and answer session set out clear rules as with most events of this kind. His rules were clear and simple: Ask just two questions, keep it brief and simple because of time and other people on the line. Every one who came to ask questions kept this in mind and adhered to the rules until it got to this Lady  La-Belle’s turn. And what should have been a few minutes of questions turned into an outre session of drama.

‘La-Belle’ as she identified her self started off as just another guest asking questions but for her altiloquent attitude and American accent which she tried not to make too obvious but couldn’t help. Then she insisted on asking more than two questions and wanted to take her time doing so. The anchor for obvious reasons wasn’t going to allow it and tried to politely stop her. At this point, all hell was let loose and she started throwing tantrums, screaming at the top of her voice. She started asking aggressively  why shouldn’t be allowed to ask a smart question, and why the anchor was trying to stop her. Bear in mind that she was only entitled to two questions which she already asked. And while she was doing so, she was taking her time and giving dramatic pauses ( imagine a woman who is about to lose it and tries to take in some air some some seconds) in between. At a point she unscrewed the mic and then the crowd started to murmur and boo because others who came to ask questions before ‘La-Belle’ spoke into the mic fixed on the podium. Even the Guv’nor of Niteshift Coliseum, Mr. Ken Calebs-Olumese spoke into the mic, but this Lady felt the need to unscrew the mic, to make her point. The organisers then tried to stop her from removing the mic but BOS butted in and told them to let her speak. He also said that as an aspirant, he understood the need to be accommodating and act  like a father to all and the crowd applauded. Unfortunately all this wasn’t captured in the video circulating online. This is also  why in the 28 second video that is circulating online, you see her holding the mic. 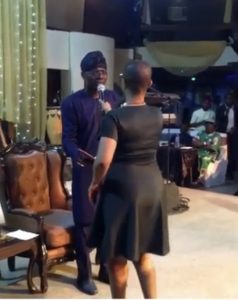 Another thing I found very interesting was that the question she rabble-roused and created a scene for was basically the same question she asked as her second question, the question bothering on Landlords being  menaces to tenants and how he would handle it if he became Governor. So I’m still as stunned as I was on Sunday relieving the event because there was absolutely no need for  the drama. Watch the 28 second clip on the over 10 minutes drama unfold below:

In the video above, we see La-Belle question BOS and shockingly moves close to him with the Mic to the horror of the crowd. BOS asks her to take her seat since she had already asked her questions and someone takes her off the stage.

What I found pretty impressive was how well BOS handled the situation especially the invasion of his personal space. Even I, as a guest was super stunned at what unfolded and couldn’t ratiocinate what I had just witnessed. This Lady’s actions wasn’t just aggressive, she uncouth as well. And as she stormed off after she was escorted off the stage, she walked towards my table, faces me and started asking why it was a problem to be ‘smart’ and ask a ‘smart question’. I just starred at her in utter bewilderment because I was even more stunned by the fact that she believed the ladies at my table will support the reprehensible display of shame she just exhibited. Some elderly women, part of the VIP guests then came to her and tried to pacify her while BOS answered her questions.

Thinking back now, I still can’t wrap my head around the unwarranted drama, especially when she ended up asking the same question twice. So this begs to question, did some people put her up to it? Was she trying to deliberately rile him up in the hope of getting a negative reaction? Another reason why I cant help but feel that there is more to La-belle is the way some social media trolls have supported her actions excusing it as that of a Nigerian frustrated by bad leadership and politicians. This notion is of course preposterous , but even if I were to go with it, BOS is not yet Governor, he is still hoping to be, and no one except God can say for a fact that that will happen. So why get so worked up and negatively adrenalised? Questions, questions.

In conclusion,  If I had any doubt about BOS, I’m convinced by the way he conducted himself in the face of this unmerited aggression, to give him a chance. Of course my decision is not based solely on the fact that he conducted himself like a gentleman in a seemly unnerving situation(I have listened prior to most of his solutions to issues synonymous to Lagos), but it was definitely a plus.

Now I know this is no guarantee that he will do all he has promised in his manifesto or that he will make a good leader. However, seeing first hand hand how he handled the Labelle situation, I’m willing to give him a chance, to at least prove himself.

The rest, time will tell.