Pants, Pads, Shoes, Hair: How Ritualists Are Employing New Methods To Carry Out Their Nefarious Agenda 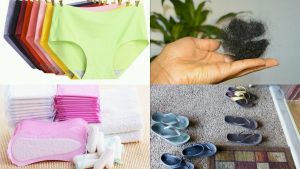 Yesterday I visited one of my best friends on the Island, just before heading to a meeting. And while I waited for the door to be open after knocking, my eyes floated to the transparent waste bag her neighbour left outside her door. Clearly visible were wrappers of possibly used sanitary towels, and the bag even had big holes. I cringed, when the possibility of someone else but me who had evil intentions easily picking them out without anyone noticing crossed my mind. This is the  sad reality of Nigerian women today, where sanitary towels, pads, pants and even hair are now being picked and stolen for ritual purposes.

My thoughts were interrupted by my friend’s kid sister who opened the door. As I walked in I still thought about the exposed Sanitary towels. After exchanging pleasantries I asked if she knew her neighbour or at least had a descent relationship with her. She said she did and was curious about why I asked. I then told her that in today’s perilous times, it was very unsafe to dispose sanitary towels so carelessly because of how desperate people have become for money. She agreed and promised to speak to her neighbour about being more careful.

How did we get here, I ask myself? How did things get so bad? I remember, growing up my Mum always warned to be careful about talking to strangers, and disposing of sanitary towels carelessly especially while I was in the University. I also remember in yesteryears, we used to hear spine chilling stories of Albinos ( No this doesn’t happen in just Tanzania) and hunchbacks been targets of ritualists, aside the regular kidnap and reported disappearances of people from time. But never has it been this bad, where sanitary pads, under pants, hair, etc  are now being stolen and even traded for money.

Talking about hair, My mum was the first person who shared a whatsapp circulated message with me. The crux of the Whatsapp audio which has since gone viral was that a woman recently caught a hair stylist trading hair of various people for money. The nefarious hairstylist who was caught in the act confessed that she usually sold each black nylon of hair for N450,000. And the evil collectors could come more than once a day for ‘pick up’.

While this evil phenomenon may not be entirely new, the fact that it has started happening again and the modus operandi now similar to the ‘pant trade’ is what is somewhat alarming. Or perhaps it never really stopped happening, but thanks to Social Media, particularly Whatsapp, people can now easily share their experiences to warn people.

In the 70’s my mum- while we recently discussed the menace of Ritualists who today have became super desperate-told me about an offer that was made to her friend, who had a Salon at that time. According to her, a lady visited her friend and offered her an insane amount of money in exchange for hair from a white woman, which she later found out was in high demand in the world of Ritualists. At that time my mum’s friend has a lot of white customers so it would have been a piece of cake. Of course she rejected the offer, but guys, this was as far back as the 70’s, so no be today.

Fake news some may argue makes it difficult to validate the authenticity of some of these circulated whatsapp messages warning people about the new tactics Ritualists are now employing in today’s world to use unsuspecting victims for money. But when similar stories with different details are reported at different places over a short period of time, then we must be cautious and careful.

The most recent one aside the pant stealing trend is ‘the cleaning of shoes.’ Several quarters have reported that people have been caught using handkerchiefs to clean the shoes of people they know and even strangers. I hear these desperate people clean the shoes with a handkie or clothe and then take it to their ‘witch doctors’ to use for money rituals. As at the time of this report it is unclear if the victims die as a result or just start experiencing undue and unexplained hardship, but it’s been advised that people should be more careful with leaving their shoes outside when visiting friends or family or even any where where they can’t clearly see the shoes. Better safe than sorry.

While both sexes could fall victim to these Ritualists, the devised methods of using pants, hair, and even used sanitary pads puts women more at risks as victims. But generally, we all need to be more cautious and careful.  We also need to be prayerful too, because in the end, there are probably many other ways that these desperate, twisted Ritualists use that we are yet to be aware of.

Oby Ezekwesili Resigns from ACPN, Begs For ‘Forgiveness’ For Withdrawing From Presidential Race

Man On The Run After Allegedly Using His Daughter For Money…