A Nigerian man identified as Shadrack Okpomhe, has taken to his Facebook page
to call out another man named Olorogun Jude Akporu.

In a post shared on social networking site Facebook, Shadrack alleged that Akporu dated his female friend for 18 years since their secondary school days and recently has dumped her to marry another lady.

He dated my friend for 18yrs and dumped her to marry another lady.

O KARMA, I call on you to visit this man Asap

My religion doesn’t permit us or me sometimes to call anyone a demon, but this particular man here makes me equate him not only to a demon, but a senior advocate in the demonic world, sometimes I wonder why ladies commit suicide just because of failed relationships or marriage in as much I don’t encourage it, but there are some cases they got no option than to take their own life, but this won’t be the case because karma isn’t a bitch anymore but an asshole in the hood.

The pictures of the man here is named Olorogun Jude Akporu he has been dating a friend of mine for the past 18yrs, from secondary school down to higher institution till on Friday night 10-5-2019, my friend does alot of things for him to make him happy at all cost, before then he blocked my friend on facebook and chats her up only on WhatsApp just because of his new found love, each time. My Friend talks about it, he gives her hope that she shouldn’t worry that he in charge , to the extent he extorted my friend over a million naira , few weeks ago, the banns of marriage was announced in the church behold it was Jude whose name was mentioned, and when we heard about it, I called my friends attention who couldn’t even believe her eyes anymore, only for this man to come around and tell my friend that, his parents are the ones forcing the lady on him that it was never his intention to marry that lady at same time she is the one he loves, this went on and on with much plea and crocodile ? tears ? .

He even encouraged my friend to get pregnant for him so that he can use that as a tool to cancel the already proposed marriage.

Just yesterday this wolf in a sheep clothing wedded Another lady. 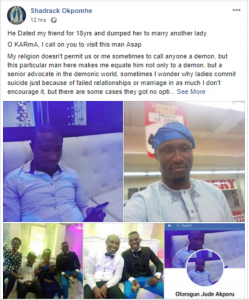 People like you make ladies go extra mile to Commit suicide or life unbearable for who causes them pain, and If my friend should go an extra mile to make this happen, I won’t blame her for anything because you choose to be heartless and inhuman, what you won’t want another person to do to you as a Person because it hurts and might lead to what one never planned for.

Seriously Mr Olorogun Jude Snooty, pray to God to forgive you your sins

Now u are happily married and according to your facebook status you talk about been a honest person, what does it take to be honest when you ain’t honest to your own self?

What has happened to your conscience?

Did you sell it or it’s been stolen from you or you lost it?

Karma isn’t a bitch anymore, but a staff of the Neibourhood and I hope this pain you just caused tonight won’t linger in your home forever.

All wish you all the pain and agony you have caused another sister whose in tears and pain right now .

I just pray God help your wicked and diabolic soul.

Chris Attoh’s Wife Bettie Jenifer Was Married To Two Men Simultaneously, The Other A Druglord

President Buhari To Be Inaugurated May 29th, Not June 12th- Presidency

Donald Trump Banned From Facebook For Two Years Over Capitol…