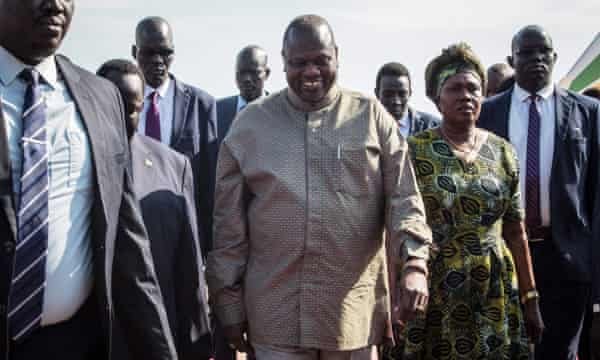 South Sudan’s Vice President, Riek Machar and his wife Angelina Teny, who serves as defence minister, have tested positive for coronavirus, it emerged on Monday.

This was confirmed in a statement released by his office, stating further that “a number of his office staff and bodyguards” have also tested positive for the virus.

Machar who also confirmed this on a state television, said he would be on self-isolation for 14 days at his residence alongside the rest of his staff who tested positive.

As at press time, South Sudan has recorded 347 cases of coronavirus and six deaths.

In the same vein, Sudan has extended a lockdown of the state of Khartoum by an additional two weeks from Tuesday to check the spread of the virus, the state news agency reported late Monday.

The country have registered 2,591 cases and 105 causalities as at Monday.

In other news, Ugandan police have arrested a prominent academic Stella Nyanzi, a vocal critic of President Yoweri Museveni, for allegedly inciting violence as she protested against lockdown measures to curb the spread of coronavirus, Reuters reports.

The East African nation, with 284 cases and no deaths, has implemented one of Africa’s strictest lockdowns, closing businesses and schools, banning public gatherings and the use of private and public vehicles other than those of essential workers such as medical staff.

We detained her for inciting violence. She is exploiting the Covid-19 situation to advance her own political motives.

Nyanzi, who is an author, university lecturer and human rights activist has over the years earned a huge following on social media for her bold attacks on the President over his decades-long rule.

The activist was arrested in Kampala after she and a small group attempted to present to the prime minister a petition demanding the lifting of the lockdown and the distribution of free face masks to the population.

The petition also called for the release of thousands jailed for alleged violations of anti-coronavirus measures like a dusk-to-dawn curfew.

Terrorism May Persist For Another 20 Years In Nigeria – COAS…