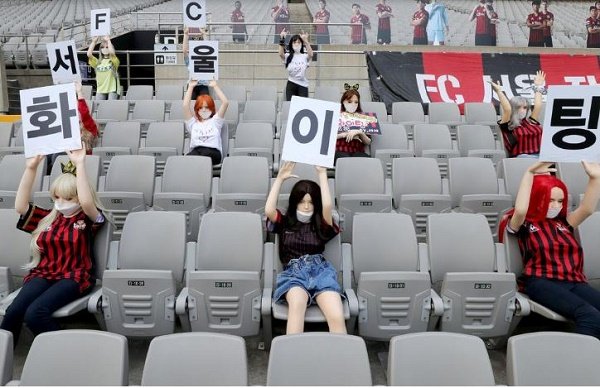 South Korean football club, FC Seoul has been forced to apologise for using ‘sex dolls’ to fill their empty stadium as stand-in fans for a match on Sunday.

K-League, the country’s professional football, resumed on May 8 with matches being played behind closed doors without fans due to the coronavirus pandemic.

Since the resumption of the league, clubs have been struggling to improve the atmosphere at their grounds with pictures of supporters and by using artificial crowd noises.

But FC Seoul went overboard by using life-size ‘mannequins’ – 20 female and five male, that some fans claim to be ‘sex dolls.’ 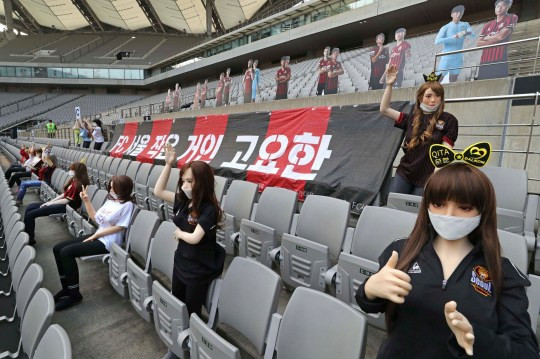 The move, however, generated backlash from several quarters on social media. Some of the dolls were seen holding signs advertising x-rated websites – despite pornography being banned in South Korea.

Reacting to the development on its social media pages, the football club apologised for the controversies stirred by its action.

In its statement, FC Seoul said;

We would like to apologise to our fans. We’re genuinely sorry to our fans about the installation of the mannequins at our game on May 17. We confirmed from the start that the mannequins we installed in the stands had no relation to the adult toys, even though they do indeed resemble real humans. 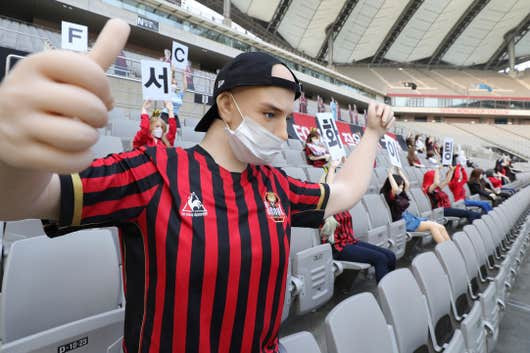 However, Dalkom has been distributing some of the mannequin products to another business named Soros, and in the process of return and exchange of the products between them, the installation at our stadium included some products with messages in text that are related to the adult toys. 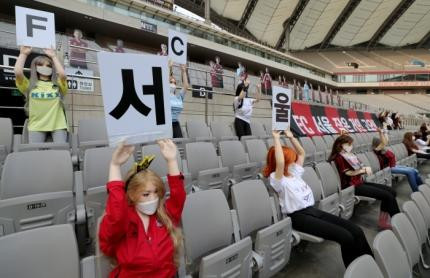 That was a problem on our employees who couldn’t check every detail of everything that was installed. That is an inexcusable mistake on our part.

Though the club insisted that they used “premium mannequins” not “sex dolls,” it however, admitted that the dolls came from a supplier that produces sex toys.

According to BBC, Dalcom has since apologised to FC Seoul, explaining that the adverts were from a sex toy company who they had partnered with.