The Life And Times Of Late Ravi Zacharias, The Christian Apologist Who Defended Christian Faith Until His Last Breath

For a man who attempted to commit suicide at the age of 17 after giving up on life, Ravi Zacharias sure made a lot of impact in the lives of millions of people in and out of the Christendom, by accepting the call to be a man of God.

The Indian-born Canadian-American Christian apologist, Zacharias who died on May 19th 2020, lived much of his life in public, speaking to countless people across the world about Christianity.

Zacharias was born on 26 March 1946 into a family in Madras, India. He grew up in Delhi after his family moved there.

Though born into a Anglican/Hindu home, up until his teens before he gave his life to Christ, he was an atheist, who tried to commit suicide at 17 years of age by swallowing poison.

While he was in the hospital being treated, a local Christian worker brought him a Bible and told his mother to read to him from John 14.

According to Late Zacharias, it was John 14:19 that caused a paradigm shift in his life. He gave his life to Christ and prayed;

Jesus if You are the one who gives life as it is meant to be, I want it. Please get me out of this hospital bed well, and I promise I will leave no stone unturned in my pursuit of truth.

After this life and death experience, the newly converted Zacharias became recognized in a predominantly white evangelical subculture, with his vocal and logical Christian views.

Until his death, the preacher was a leading figure among Christian Apologists – a branch of Christian theology that defends Christian doctrines against objections.

In 1966, Zacharias immigrated with his family to Canada, earning his undergraduate degree from the Ontario Bible College in 1972 (now Tyndale University). 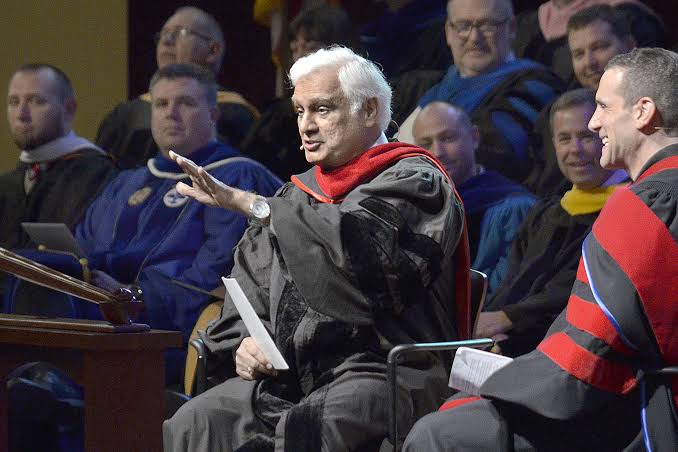 He founded Zacharias International Ministries (ZIM) in 1984, which became a platform to train Christian scholars and authors who continue to speak, resource, train and address the questions of several people around the world.

(Ravi) saw the objections and questions of others not as something to be rebuffed, but as a cry of the heart that had to be answered.

People weren’t logical problems waiting to be solved; they were people who needed the person of Christ. Those who knew him well will remember him first for his kindness, gentleness, and generosity of spirit. The love and kindness he had come to know in and through Jesus Christ was the same love he wanted to share with all he met.

Rev. Zacharias, ordained by the Christian and Missionary Alliance in 1980, gained prominence three year later, at age 37, when he preached at the invitation of popular evangelist Billy Graham at a conference in Amsterdam.

After this, he became one of the most sought-after evangelists, promoting apologetics in defense of Christianity. Thereafter, he began building a ministry based on what he called intellectual arguments for evangelical belief rather than direct appeals to faith.

The apologist spent his life drawing on philosophy, poetry, science and other areas of academia to show how Christianity gives answers to life’s most pressing existential questions.

However, Rev. Zacharias’ views which went beyond the focus on the Christian faith occasionally drew controversy.

The preacher expressed views on culture war questions such as abortion, transgenderism and homosexuality. He often engaged in tense question-and-answer format with students who did not share his views. Notably, one of these moments was at the University of Pennsylvania in 2014, which gained over 2 million views on YouTube.

He did not get involved in political campaigns but befriended political leaders, particularly conservative Republicans.

Zacharias penned many of his thoughts about life and Christianity in books which are still widely read and lectured at colleges to make an intellectual defense of the Christian faith.

He authored more than 30 books, including bestsellers like ‘Can Man Live Without God?’ ‘Light in the Shadow of Jihad’ and ‘The Grand Weaver’

Zacharias was the host of popular radio programs Let My People Think and Just Thinking.

His ministry listed revenue of $25 million in 2015, according to its most recent public filings and has grown to more than 250 employees and 15 locations around the world.

Until his death on Tuesday, in his Atlanta home, United States, Zacharias was battling sarcoma cancer.

He is survived by his wife, Margie, daughters Sarah and Naomi, son, Nathan, and five grandchildren.