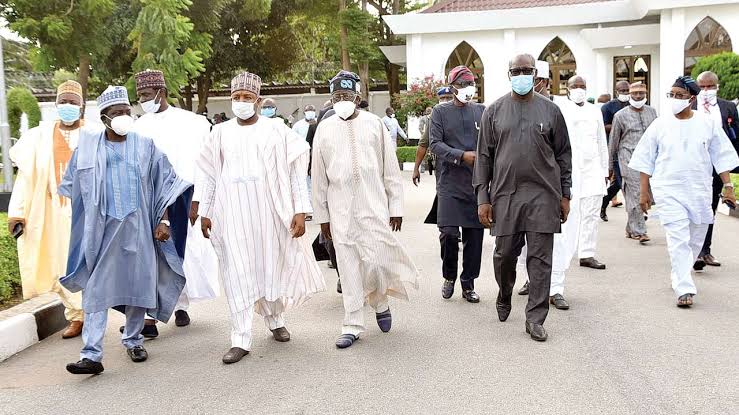 Eight governors of All Progressives Congress have held a meeting with the National Leader of the party, Asiwaju Ahmed Tinubu, at Lagos state’s Marina House, it emerged on Monday.

Although details of the meeting which held on Sunday are still sketchy as at the time of filing this report, Channels TV reports that the governors met with Asiwaju Tinubu to seek his intervention in the political crisis in the state.

APC in Edo had been split into a group loyal to the APC National Chairman, Adams Oshiomhole, and another loyal to the incumbent governor, Godwin Obaseki, following a disagreement between the two.

It was gathered that the meeting with Tinubu therefore took place to make case for Obaseki, after being overthrown by Pastor Ize-Iyamu to emerge as gubernatorial candidate of APC faction loyal to Oshiomhole.

This indicates that Obaseki is expected to slug it out at the party’s primaries on June 22 with Ize-Iyamu.

Meanwhile, there have been disagreement over the mode of primary to be conducted to choose the party’s main flag-bearer for the governorship election.

While the National Working Committee of the party had approved direct primary process, the faction loyal to Governor Obaseki preferred an indirect primary.

The position of the latter was supported by the Chairmen of all the local government areas in Edo State.

Book Launch: Aisha Buhari Is A Voice Of Conscience Calling…