Chelsea In Advanced Talks With Thiago Silva Over Free Transfer 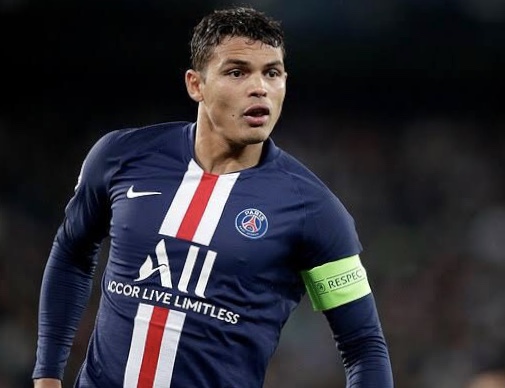 Chelsea have engaged in advanced talks with the representatives of Paris Saint-Germain defender Thiago Silva over a potential free transfer this summer.

This comes as coach Frank Lampard hunts for defensive reinforcements and has been offered the chance to sign the player.

The experienced Brazilian, 35, is set to leave Paris Saint-Germain (PSG) after he captains the club in the Champions League final against Bayern Munich on Sunday.

According to The Athletic, Lampard has held talks over a move to Stamford Bridge over the last few days although a deal is not yet close as they iron out several details.

The former Milan centre-back’s representatives have held talks over a deal with Chelsea, who are weighing up whether the 35-year-old’s vast experience would improve a shaky back four.

Chelsea have a policy of only offering players over the age of 30 one-year deals, however, the defender could be offered a two-year deal, something offered to David Luiz before his sale to Arsenal and Willian before he took up a three-year contract at the Emirates.

And Silva is said to be keen to play in the Premier League before he retires after a glittering career.

He could well prove a short-term fix in a problem area for Frank Lampard after his side leaked goals last season.

Silva, who captained Brazil at the 2014 World Cup, has interest from elsewhere. Fiorentina Club have offered him a two-year deal and one concern for Chelsea will be whether Silva, who turns 36 next month, would be able to handle the pace and intensity of the Premier League at his age.

Yet the proposition is of interest to Chelsea, who conceded 54 goals in the league despite finishing fourth last season.

Chelsea, who are close to strengthening their attack by signing Kai Havertz from Bayer Leverkusen, are also looking for a new left-back and there is growing confidence that they will be successful in their pursuit of Ben Chilwell.

While Leicester will demand a high price for Chilwell, sources believe the England international will secure a move to Stamford Bridge this summer.

Just In: Police Invite Mailafia To Abuja On Monday