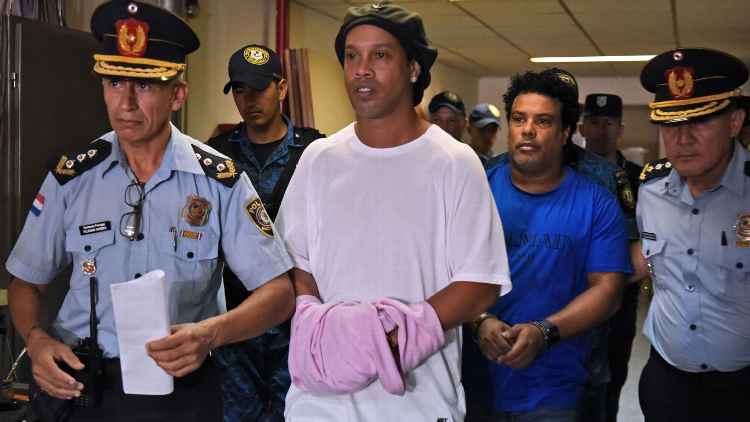 Former Brazilian international, Ronaldinho has been released from house arrest in Paraguay following his detention for using a forged Paraguayan passport.

According to reports, the passport bore Ronaldinho’s name, with his correct birthplace and date of birth, but it claimed he was a naturalised citizen of Paraguay.

He was arrested along with his brother, Roberto de Assis Moreira and were detained since March 4.

Ronaldinho and his brother then spent another four months in a hotel in the country’s capital on house arrest after release from police custody in April.

The World cup winner was finally released on Monday, August 24 after accepting the terms of his release, which include payment of $90,000 in damages. His brother, who is also Ronaldinho’s business manager, must pay $110,000.

Judge Gustavo Amarilla while clearing them of all charges said the precautionary measure of his arrest is now lifted, and there are no more restrictions placed by Paraguayan justice.

The judge explained that he did not issue a “definitive dismissal” of the case but rather that Ronaldinho was benefitting from a “conditional suspension of the procedure.”

He stated that Roberto will not serve the two years in prison to which he was sentenced by the magistrate, although he will have to appear before the Brazilian Justice periodically.

Both brothers will have to pay different amounts of money in respect of “social reparation”and to terminate their processes, according to the measures established by the judge in his ruling.

This was after the investigation of the prosecutors in the case, who at this preliminary hearing indicated to the judge that the brothers “had knowledge of the preparation of these adulterated documents that they were to be used in Paraguayan territory”.

Regarded as one of the world’s greatest of all time, he won the World Cup in 2002, the Champions League and two La Liga titles with Spanish giants Barcelona, before playing for French champions Paris Saint-German and 2010 champions league winners Inter Milan.

After an exciting football career, he retired in 2015.

No Infrastructure For COVID-19 Testing At Airports – NCAA

Football Legend, Ronaldinho Freed After Being Arrested For…

Football Legend, Ronaldinho And His Brother Arrested In…