Just In: Police Invite Mailafia To Abuja On Monday

Police have invited a former Deputy Governor of the Central Bank of Nigeria, Dr. Obadiah Mailafia, to its Abuja office on Monday, August 25.

It would be recalled that DSS had last week invited Mailafia to its Jos office twice over alleging that a Northern Governor is a Boko Haram commander during a radio interview in Abuja.

Mailafia, who was the Presidential candidate of the African Democratic Congress in the last election, said he got the information from some former Boko Haram fighters.

In an invitation letter addressed to Mailafia, however, the police did not reveal the reason for the invitation.

The letter was signed by the Deputy Commissioner of Police (Admin), Umar Sanda, on behalf of the Deputy Inspector-General of Police, Force Criminal Investigation Department, Abuja.

In the document with reference number 3000/X/FHQ/ABJ/VOl.245/8 dated August 20, the police asked Mailafia to be at the Force Criminal Investigation Department Complex, Garki Area 10, on Monday, August 24, 2020 by 11am.

The letter stated that;

We wish to inform you that this office is investigating a case in which your name featured prominently. In light of the above, you are invited to in an interview with the Deputy Inspector-General of Police, FCID Abuja, through the undersigned on Monday, August 24, 2020 by 11am at Room 407, 3rd Floor, FCID Complex, Area 10, Abuja. Accept the assurances of the Deputy Inspector-General of Police, FCID. 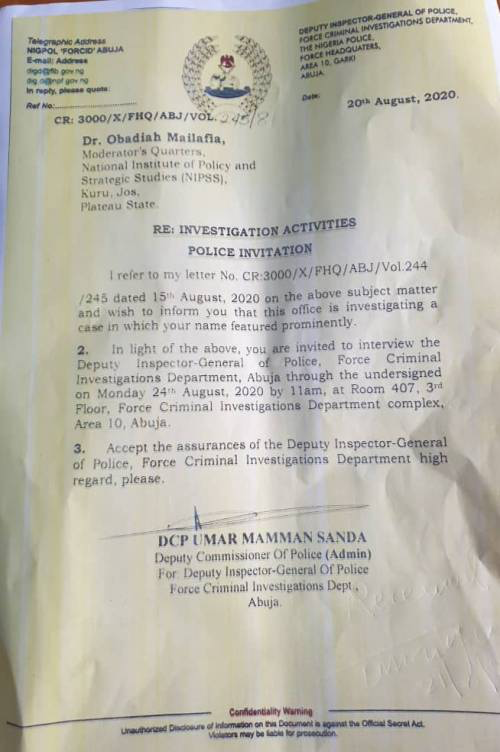 Mailafia is currently a member of the Directing Staff of the National Institute for Policy and Strategic Studies, Kuru.

Chelsea In Advanced Talks With Thiago Silva Over Free Transfer