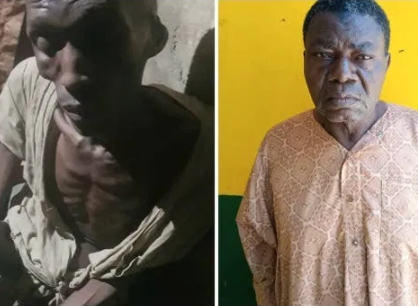 Police in Kano state have arrested Aminu Farawa, the father of 30-year-old man for locking up and starving his son for seven years.

MDB earlier reported that police rescued the man after a concerned neighbours alerted the police and a human right group.

Aminu Farawa, a resident of Farawa Quarters, Kumbotso Local Government area of Kano State allegedly locked up his son inside his car garage within his house for about seven years without proper feeding and health care.

Spokesperson of the police, DSP Abdullahi Haruna who confirmed the development on Friday said good samaritans reported the incidence leading to the rescue of the victim at about 11:15 pm on Thursday night.

DSP Haruna said upon investigation, the father confessed to having locked up Ahmed who is looking emaciated and dehydrated for three years for allegedly using drugs.

Police in its statement stated;

The Kano State Police Command wishes to inform members of the general public that on the 13/08/2020 at about 2315hrs, information received revealed that one *Aminu Farawa* ‘m’ of Farawa Quarters, Kumbotso LGA Kano State locked up his biological son, one *Ahmed Aminu* ‘m’ 30 years old of the same address inside his car garage within his house for about seven (7) years without proper feeding and health care.

Team of Operation Puff-Adder was raised and immediately swung into action. The victim was rescued and rushed to Murtala Muhammed Specialist Hospital Kano and admitted.

The father was arrested. Preliminary investigations revealed that the father confessed to having locked-up the victim for three (3) years on allegation of suspected Drug-Abuse. Those that reported the incident said he (the father) locked him up for 7yrs, however, the father confessed 3yrs.

Haruna said the Command’s Commissioner of Police CP Habu A. Sani, ordered the case be transferred to the State Criminal Investigations Department (SCID) for discreet investigations.

Watch video of the man being rescued by police below;

10 Dead, 500 Hospitalised From Consumption Of Flavoured…