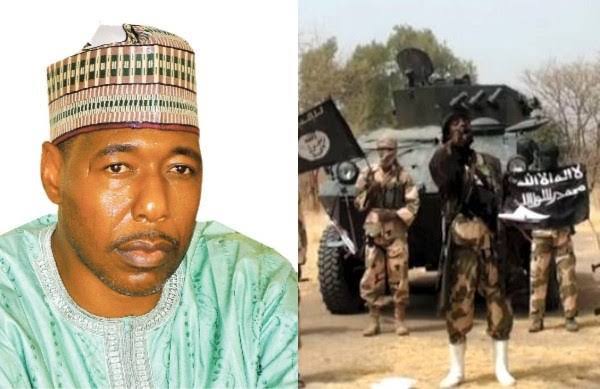 Fifteen security personnel have been killed after the convoy of the Borno state governor, Babagana Zulum, was again attacked by Boko Haram terrorists along the Baga Highway in the state on Friday, September 25.

The attacked officials, according to sources familiar with the attack, were heading to Baga town ahead of government’s planned return of internally displaced persons (IDPs) from Maiduguri to the camps.

It would be recalled that in July, there was a similar attack on the Governor’s convoy around the same axis by the insurgents on his way from Baga.

Governor Zulum was on a trip to Monguno and Baga towns to distribute food to IDPs.

Zulum was unhurt as soldiers and police officers guarding him repelled the assault on the convoy.

In the latest attack, a battery of armed soldiers and police officers, as well as Civilian-JTF personnel, were deployed to provide escort to the officials.

The convoy ran into an ambush by Boko Haram at a spot called Korochara, which is about 2km away from the base of the Multi-National Joint Task Force on the way to Baga from Monguno.

According to an official of the Borno state government who spoke with newsmen anonymously said;

Seven policemen, four C-JTF members and three soldiers died instantly as the insurgents rained bullets on the unsuspecting members of the convoy,” The source said the attack happened at about 2 pm

Borno state governor, Babagana Zulum, who is expected to supervise the arrival of the IDPs at Baga, had left Maiduguri earlier in the day via a military chopper.

Borno State government and the security agencies whose personnel were affected were yet to officially comment on the attack.

The attack happened four days after a colonel, D.C. Bako, died after another ambush by Boko Haram terrorists in the state.

Mr Bako was until his death the commander of 25 Task Force Brigade in Damboa. He died in a military hospital where he was receiving treatment after the ambush.

Policeman Arrested For Killing One, Injuring 3 Others In Sokoto