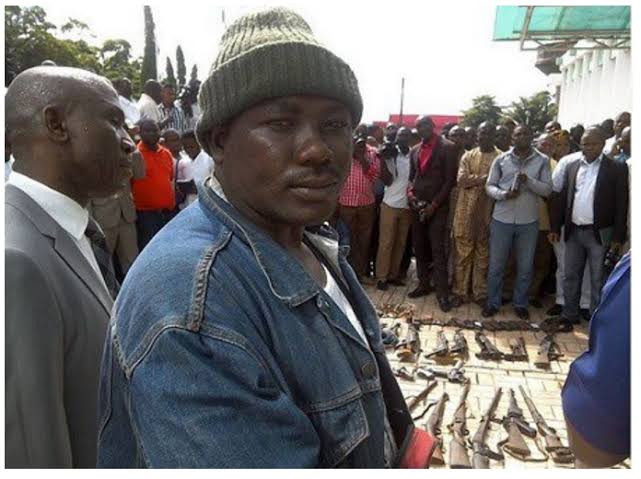 Wantor Akwa, one of the five widows of Benue militia leader Terwase Akwaza also known as Gana has revealed that her husband wanted to ‘work for God’ before being killed.

It would be recalled that on Tuesday, the Commander of Operation Ayem A. Kpatuma, Major General Ali Gadzama, told Channels Television that Gana was killed in a gun battle with soldiers.

However, a community leader, who spoke with ThePunch in Makurdi, said Gana was in a government convoy when he was dragged out of a car by soldiers at a checkpoint in Gbitse in the Gboko Local Government Area of the state.

Speaking about his death, Mrs Akwaza said her husband was in a convoy of government officials, traditional rulers and clergymen, heading to Makurdi, the state capital, to finalise the amnesty deal he had with the state government before he was killed.

The 34-year-old, who spoke with some select journalists in Abuja, Thursday September 10 said Akwaza only accepted the state government’s offer of amnesty and came out of his hiding after a former Governor of the State, Gabriel Suswam, visited and assured him that he was involved in the deal.

I was in Makurdi when they called to inform me of the incident. Senator Gabriel Suswam went to meet him on Saturday because when they went for him on the second amnesty issue, he said if he did not see Suswam, he was not going to come out.

That until Suswam comes around, he will not believe that the amnesty is true. After the initial amnesty he went back into the bush. When the second amnesty programme started, he was briefing me about the development.

Gana’s widow stated that her late husband whom she last spoke with on Saturday, accepted the government’s amnesty offer because he was tired of living in hiding and wanted to start living as a freeman.

I spoke with him on Saturday and he told me that he was going for the amnesty and that he is tired of the life he was living.

Mrs Akwaza stated that she wants the government to “bring the people” who killed her husband “to justice and pay compensation” of N5bn to the family.

Suswam, who is currently the senator representing Benue North-East Senatorial District, has condemned Gana’s killing by soldiers, saying it is counterproductive to peace returning to the state.

He also called on the Federal Government to set up a judicial commission of inquiry to unravel how Gana died.

US Open: Serena Williams Loses To Victoria Azarenka In Semi-Final