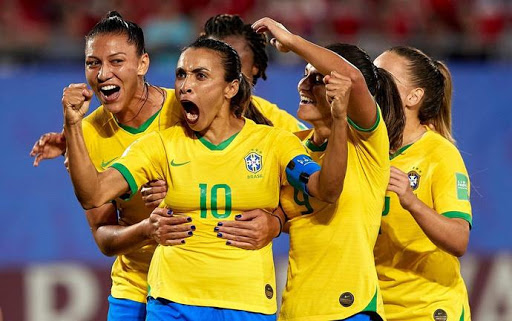 Brazil’s football association (CBF) has announced that its women’s national players will be paid the same as male players for representing their country.

All players will be granted the same daily and prize amounts for taking part in preparation periods and games.

CBF president Rogerio Caboclo made this known in a statement on Wednesday, saying that its decision was first communicated to the women’s team and their Swedish coach Pia Sundhage in March.

Since March of this year, CBF has made an equal value in terms of prizes and daily rates between men’s and women’s football. That is, the players earn the same thing as the players during the calls. What they receive by daily call, women also receive.

He expressed that it also applies to performances at international tournaments such as the World Cup and Olympics.

There is no more gender difference, as the CBF is treating men and women equally. What they will gain by conquering or by staging the Olympics next year will be the same as the men will have.

It will be proportionally the same as what Fifa proposes for women, that is to say, there will be no more gender difference in remuneration between men and women.

This means Brazil’s female players including Marta, Formiga, and Leticia Santos will receive the same payments and allowances as Neymar, Gabriel Jesus, and Roberto Firmino.

Brazil joins Australia, Norway, and New Zealand among the nations that pay their men and women the same amount.

In March 2019, the US women’s team, the current world champions, called for similar rule. They sued their federation, alleging discrimination over pay and conditions, however a judge dismissed their case in May this year but the team has appealed.