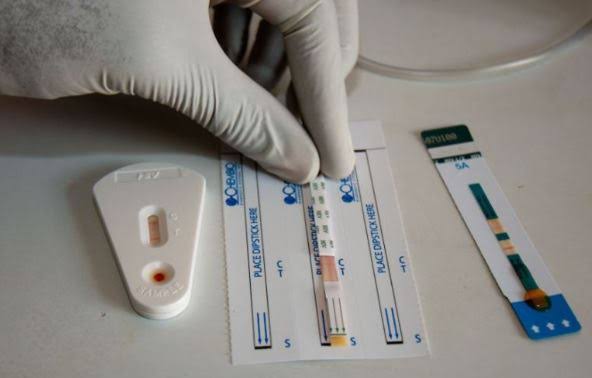 Federal Government has on Tuesday launched a rapid test kit for the diagnosis of the virus as part of efforts to increase the scope and access to HIV testing, especially among people living with HIV/AIDS.

The kit is said to have a sensitivity, specificity, and accuracy of 99.5 percent, 99.4 percent, and 99.3 percent respectively, having fulfilled the World Health Organization’s (WHO’s) specification of HIV rapid test kits, theNation reports.

Speaking during the dissemination of Wondfo HIV 1 and 2 rapid test kit, made by Prezzo Shed Investment Limited, in Abuja, the Director-General of the National Agency for the Control of AIDS (NACA), Dr. Gambo Aliyu, expressed concern that although progress has been made in reducing the prevalence of HIV, Nigeria still lags behind in the UNAIDS target of testing 95 percent of people living with HIV/AIDS by 2030.

We are happy because this is another effort for Nigeria pushing towards the achievement of the UNAIDS 95-95 target. HIV testing is the first 95, which means that 95 percent of the people who are HIV-positive should know their status. Presently, we have only 73 percent of people who are HIV-positive that is aware of their status. That means we still have a huge gap and with the Wondfo coming now to join the other test kits, we are sure that we are one step closer to achieving that goal. We want to get as much as possible of all those who are HIV-positive tested so that if they are tested, they can be placed on treatment.

In her address, the Director-General of the National AIDS/STI Control Programme (NASCP), stated;

Current data reveals that Nigeria has 1.9 million persons infected with HIV with about 1.1 million on Anti-retroviral therapy (ART). We must have 1.71 million people who know their status, which means we need to test and identify up to 600,000 HIV positive persons by December 2020 (4 months from now).

Obviously, the need for appropriate laboratory diagnostics and laboratory support for clinical decision and monitoring the effectiveness and safety of the regimens remains very important.

The result of the evaluation which was conducted at the reference testing laboratory (Public Health In Vitro Diagnostic Laboratory, Lagos) showed that Wondfo HIV 1 and 2 rapid test kit sensitivity was 99.5 percent and its specificity was 99.4 percent.

The rapid test kit has an accuracy of 99.4 percent with positive and negative predictive values of the kit to the Gold Standard as 99.3 percent and 99.5 percent respectively. These results met the requirements for the kit to be included in the first line (Screening) test of the HIV testing algorithm in Nigeria.

Also speaking, the CEO of Prezzo Shed Investment Limited (makers of the rapid test kit), Barr. Emmanuel Njoku said that the dissemination of the test kit is coming at a time when the Federal Government is concerned about the quality of care, effectiveness, and efficiency in health care service delivery.