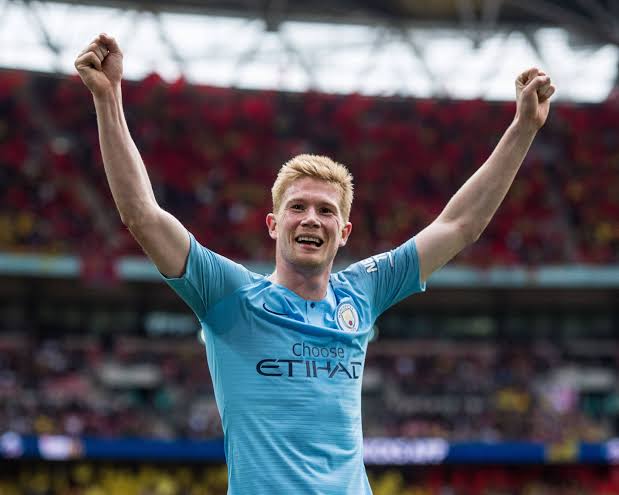 Kevin De Bruyne has become the first Manchester City player to be named the Professional Footballers’ Association’s (PFA) player of the year.

The rest of the PFA team of the year is dominated by Premier League champions Liverpool with five players, while Manchester United’s Marcus Rashford was handed a merit award for his role in the fight against child poverty.

City trailed Liverpool by 18 points in the 2019/20 Premier League season but De Bruyne, who registered 13 goals and a record-equalling 20 assists, was voted the campaign’s top performer by his peers.

This is a big honour, to be voted by your colleagues, competitors from other teams who you always play against on the field. That they vote for you for best player, it’s amazing. It’s maybe strange that I’m the first one at City, seeing all the good players who played there before and who are still playing. But it’s nice to represent the club.

The Belgian midfielder praised Guardiola’s influence for giving him the freedom to shine after a 2018/19 season where he was dogged by injuries.

We speak often about the team but in a lot of senses he knows when he gives the orders of what the team has to do that I will listen. But then on the other side he gives me a lot of freedom; I don’t know why, that’s just the way it goes between us. He knows in one way I will always put the team first and then obviously if I can help myself I’m going to do that.

Liverpool’s five-strong contingent in the team of the year was made up of Jordan Henderson, Trent Alexander-Arnold, Andy Robertson, Virgil Van Dijk and Sadio Mane.