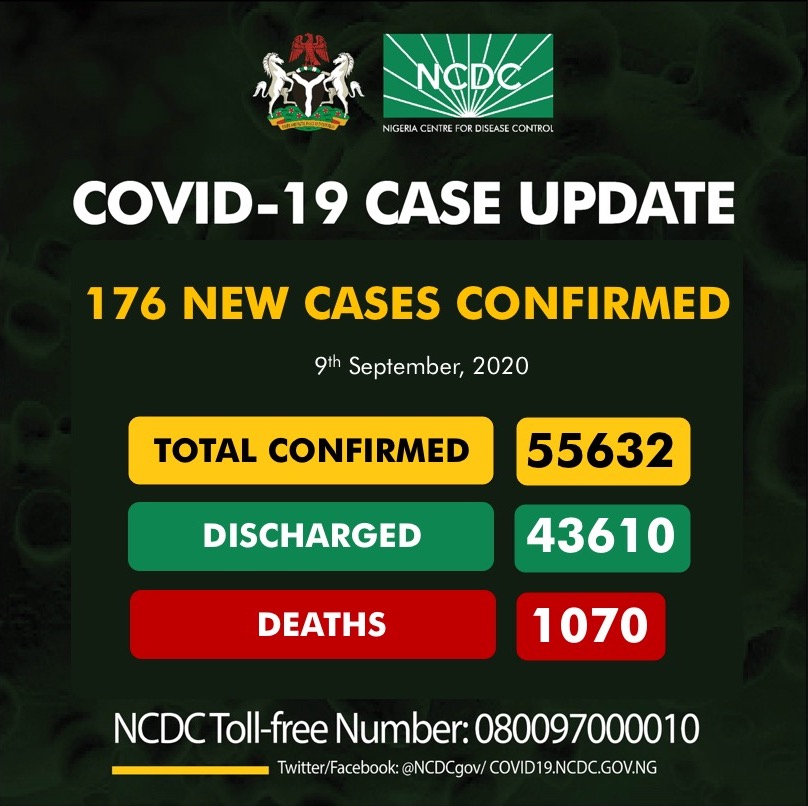 With the newly recorded infections, there are now 55,632 total cases, 43,610 discharged and 1,070 fatalities across the country.

Also, NCDC in its latest situation report has revealed that overall samples tested nationwide have increased from 426,803 to 430,712 as at September 8.

Meanwhile, in efforts to prevent the outbreak of any dangerous disease in Calabar Correctional Service Custodial center, the authority of the Center in Cross River State has solicited and received support from the state government to equip and operate an isolation ward.

The Calabar Correctional Custodial center located in Afokang Street in Calabar South as at September 8, 2020 had a total number of 490 inmates against its capacity of 450 inmates and they are about resuming admission of fresh inmates.

All new inmates will be isolated and tested of COVID-19 before being allowed to mix with old inmates.

Comptroller of Prisons in Cross River state, Mr. Thomas Yakubu Dankaro made the disclosure on Wednesday when he paid a courtesy call to the state Commissioner for Health, Dr. Betta Edu and subsequently led the Commissioner to respond with a donation of items to equip the isolation ward in the custodial center.

Dankaro commended the state government for its swift response and for the timely donation of items for the immediate set up an isolation center in the correctional facility.

I am very impressed in fact I didn’t know that she will respond so fast like this. This shows that the government of Cross River State has a great passion for its people and this shows that the state is actually prepared for something like that. We are very grateful for the way that the commissioner has responded on behalf of the Governor. For some time now, we have not taken fresh inmates because of the COVID-19 pandemic but we now have clearance to begin to accept new inmates with strict compliance to the prevention protocols.