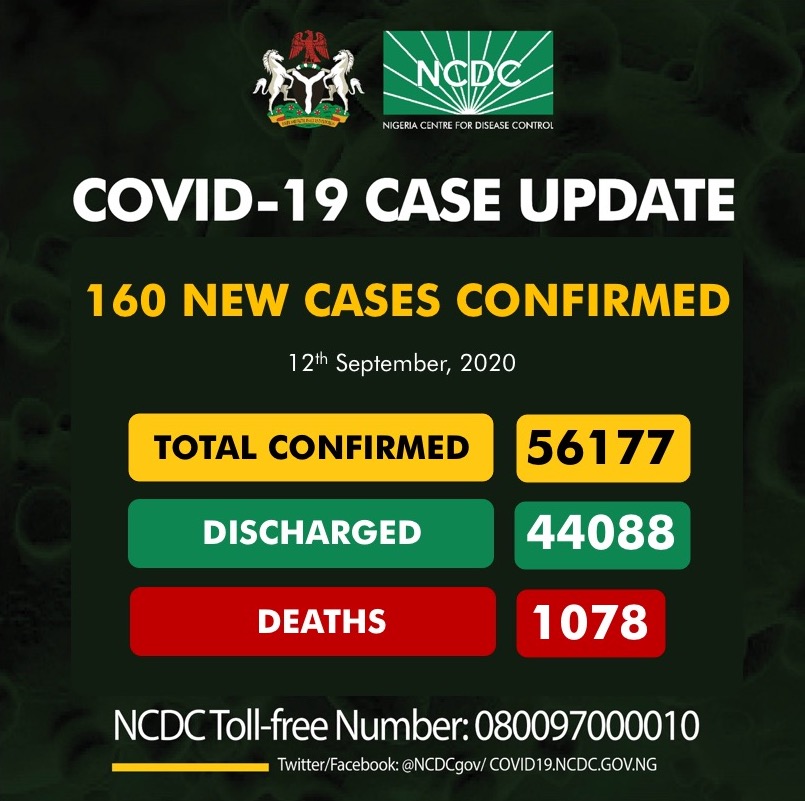 A breakdown of cases by state can be found via https://t.co/zQrpNeOfet#TakeResponsibility pic.twitter.com/TWnnzuFoSb

It would be recalled that on Friday, Nigeria recorded 56,017 total cases, 43,998 recoveries and 1,076 fatalities nationwide.

With the newly recorded infections, there are now 56,177 total cases, 44,088 discharged and 1,078 fatalities across the country.

Also, NCDC in its latest situation report has revealed that overall samples tested nationwide have increased to 438,135 as at September 11.

In other news, Pharma giant AstraZeneca and Oxford University has on Saturday said they had resumed a COVID-19 vaccine trial after getting the all-clear from British regulators, following a pause caused by a UK volunteer falling ill.

The company in a statement stated;

Clinical trials for the AstraZeneca Oxford coronavirus vaccine, AZD1222, have resumed in the UK following confirmation by the Medicines Health Regulatory Authority (MHRA) that it was safe to do so.

AstraZeneca announced on Wednesday it had “voluntarily paused” its trial of the vaccine developed alongside Oxford University after the volunteer developed an unexplained illness.

An independent committee was drafted in to review safety, in what the company and the World Health Organization described as a routine step.

The committee has concluded its investigations and recommended to the MHRA that trials in the UK are safe to resume.

In large trials such as this, it is expected that some participants will become unwell and every case must be carefully evaluated to ensure careful assessment of safety.