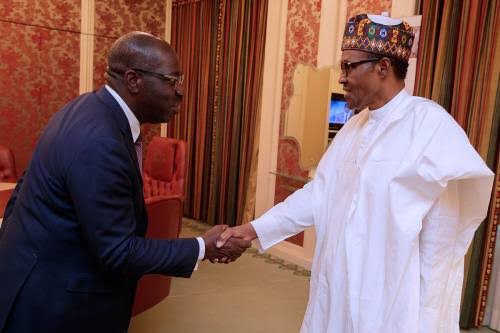 Edo State governor, Godwin Obaseki, has dismissed the possibility of his return to the All Progressives Congress (APC) after a meeting with President Muhammadu Buhari on Friday.

Obaseki won a first term in office in 2016 as an APC candidate but resigned from the party after a meeting with Buhari in June 2020.

The governor was forced out after the party refused to allow him contest for re-election, which stemmed from a fallout with his predecessor, Adams Oshiomhole, who was the party’s national chairman at the time.

He later joined the Peoples Democratic Party (PDP) and won the September 19 governorship election for a second term in office, defeating the APC’s candidate, Osagie Ize-Iyamu, and 12 other candidates.

As part of his ‘Thank You’ tour after the election, Obaseki paid a visit to Buhari at the Presidential Villa on Friday, September 25.

Addressing State House correspondents after the meeting, the 63-year-old said it would be immoral for him to return to the APC.

He expressed that dumping his new party for a return to APC is a contradiction of Buhari‘s own gospel of integrity.

The governor had earlier this week said that there is not much of a difference between both the APC and the PDP in terms of ideology and membership.

He noted that it is still early days in the nation’s democracy for important distinctions to appear.

Meanwhile, Ize-Iyamu has refused to concede the election to Obaseki, alleging that the process was marred by numerous irregularities.

Read Also: Edo Election: I Am Studying The Results, Will Announce My Next Plan Soon – Osagie Ize-Iyamu

This comes despite the fact that the national leadership of the APC congratulated Obaseki and praised the election as a victory for democracy.