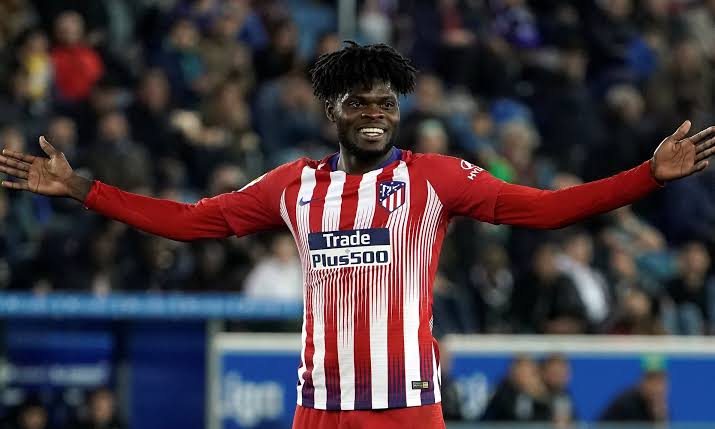 Under La Liga rules, all players must have a buyout clause in their contracts and any club wishing to activate it must deposit the full amount with the Spanish league.

The league organisers will then release the player’s registration before passing the fee onto the selling club.

Atletico Madrid in a statement on its website reads;

La Liga on Monday informed Atletico Madrid at 23:28 that representatives from Arsenal arrived at the footballing body’s headquarters looking to meet Thomas Partey’s release clause. Thus, the player has unilaterally ended his work contract that he had signed with the club through to 30 June 2023.

Partey has been a long-term target for the Gunners, who were looking to bolster their options in central midfield.

We have been watching Thomas for a while, so we’re now delighted to add such a high quality player to our squad. He is a dynamic midfielder with great energy. He brings a lot of experience from a top club that has competed at the highest level in La Liga and the Champions League for several years.

Thomas has all the right attributes to be a top player for Arsenal. He is a leader on and off the pitch and he is exactly the kind of player and person we want at the club.

We already feel like we know Thomas very well based on the work we have done analysing his performances closely in recent times.

With his all-round game and positive aggressive style, he will be a brilliant addition to our squad. We’ve made a strong start to the season and we want to continue to build on this with Thomas now part of our club.

Partey, 27, joined the Spanish side’s youth academy in 2012 and has gone on to establish himself as an integral part of Diego Simeone’s side since making his debut in 2015.

He was part of the Atletico sides that reached the 2016 Champions League final and beat Arsenal on the way to winning the Europa League in 2018.

A tough-tackling midfielder with an eye for goal, the player scored 16 times in 188 appearances for Atletico since breaking into the first team in 2015.

Partey join up with his new team-mates next week after he returns from international duty with Ghana.

Luis Suarez Agrees Terms With Atletico Madrid Ahead Of Barca…