#BlackTuesday: ‘We Have Not Recorded Any Fatalities’ – Governor Sanwo-Olu Gives Report On Lekki Tollgate Shooting (videos) 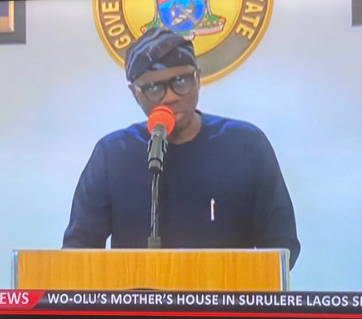 Governor Sanwo-Olu has said there have been no fatalities recorded after military men reportedly opened fire on #EndSARS protesters at Lekki tollgate in Lagos state on Tuesday night, October 20.

Speaking at a press briefing this morning, Governor Sanwo-Olu said;

Whilst we pray for the swift recovery of the injured, we are comforted that we have not recorded any fatality as against the widespread circulation on social media.”

The Governor said this despite video reports of at least 9 people shot dead, as the incident was live streamed by popular Disc Jockey, DJ Switch, who was at the scene of the shooting.

According to her, soldiers came in en masse shooting at people, some of who got hit by the bullet.

Someone just died on @djswitch live video😭😭😭😭
At this point if you think you have leaders then you need medical attention pic.twitter.com/quwE8G5fFY

#EndPoliceBrutalityinNigeraNOW Dj switch live is too heartbreaking💔, the man with the bullet in his leg is still holding the Nigerian flag. This is pure Genocide-You’re killing us💔#basedonwhat pic.twitter.com/bokt4FXC8f

BREAKING: The guy with the Gun bullet in his leg on DJ Switch Insta Live is DEAD, his last words were “Peace and Unity”

Lekki Tollgate: ‘I Am Hale, Hearty’ – Eniola Badmus Reacts To Report That She Was Shot During Brutal Attack On Peaceful #EndSARS Protesters (video)