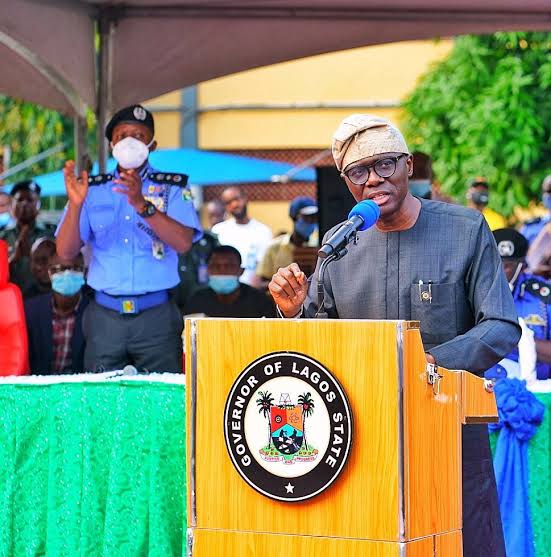 Lagos State Governor, Babajide Sanwo-Olu has awarded scholarship to children of policemen who died in the violence that erupted in the state few days ago following #EndSARS protests.

Sanwo-Olu announced this during his visit to the Lagos Police Command Headquarters, Ikeja, on Wednesday to interact with police personnel on ways to police the state better.

He said he has directed the Lagos State Scholarship Board to award scholarship to the children of the slain officers up to the university level.

It was learnt that twenty-nine Divisional Police Stations and 17 Police Posts were razed by hoodlums disguising as #EndSARS protesters.

The Governor who visited the Command to boost the morale of officers, promised to rebuild the burnt police stations and also give life insurance to police officers.

He also promised to compensate the families of the late policemen who died in the violence.

The most important requests is to offer scholarships to the children of officers who died.

I have directed the Lagos State Scholarship Board, under the Special Adviser on Education, to immediately award scholarships to the children of the slain officers.

He also said that the state government will set up a “Rebuild Lagos Trust Fund” in the aftermath of the destruction in the state.

In addition, he promised that the government will compensate the families of the policemen killed, take care of their burial expenses, and foot the hospital bills of injured officers.

Sanwo-Olu declared that all damaged personal and official vehicles of Police officers will be replaced, and insurance policies for police officers in Lagos State worked out.

He acknowledged and thanked the police personnel for their support, and the women police officers for their dedication to service to the people of Lagos State.

You have not been truly acknowledged but I want to thank you. You have been gallant. You have shown how critical you are in our society. We might come from different background but we are all humans created by God.

The Lagos State Police Command has been a delight in spite of our differences and inadequacies. You did not create the problems, these are institutional problems. As your governor, I acknowledge what you do and what you stand for.

As your governor, I take full responsibility for what happened and has not happened. I will not shy away from it.

A statement to this effect released by the Lagos state government partly reads;

Police officers lynched in the wake of the violence that erupted last week in the State will not die in vain, Lagos State Governor, Mr. Babajide Sanwo-Olu has pledged.

The State Government, on Wednesday, directed the Lagos State Scholarship Board to award scholarship to the children of the slain officers up to the university level.

The State Police Command bore huge loss in personnel, armoury and properties in the violence.

In spite of the loss, the police said they remained undeterred in performing their constitutional duties.

Sanwo-Olu, on Wednesday, made the offer to take the bill of replacing the logistics lost by the police when he visited the Command Headquarters in Ikeja to boost the morale of officers, following the demoralising events of the past week in which police officers and their stations were targeted by hoodlums.

The Governor got the assurance of the police’s commitment to strengthen security across the State from the Commissioner of Police, Mr. Hakeem Odumosu.

Sanwo-Olu said the statutory duties of the Police could not be wished away because of the actions of a few bad eggs, noting that the impact of the police officers’ absence on the roads was generally felt by residents.