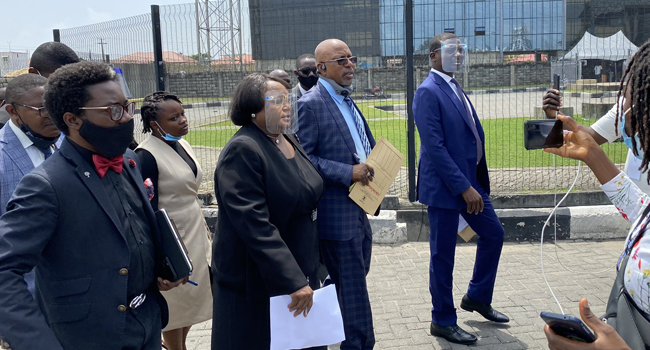 Lagos State Judicial Panel of Inquiry for Restitution for victims of SARS and related abuses and other matters has on Friday visited the military hospital at Ikoyi with a pathologist as part of the investigation.

The panel, led by its chairman, Justice Doris Okuwobi (retd.) was initially denied access to the hospital for about 30 minutes before it was later allowed entrance into the premises.

However, officials told the panel that the morgue has been under renovation since late 2019.

Brigadier General AI Taiwo and Colonel G.S Ogoh took the panel to the morgue where the ongoing renovation was confirmed.

A member of the panel, Mr. Ebun Adegboruwa, SAN, said the panel got impromptu confidential information that the facility at the hospital may be relevant to its investigation.

He said the panel is interested in visiting the morgue to assess bodies in the facility.

The panel left the facility after a brief discussion between a senior military officer and Justice Okuwobi (Rtd) without entertaining questions from journalists.

The panel had earlier visited the Lekki Toll Gate, the scene of the protest where personnel of the Nigerian Army allegedly opened fire on #EndSARS protesters.

At the scene, the panel found bullet shells in different locations at the site, 10 days after the shooting incident.

Prior to the inspection visit to the site, representatives of the Lekki Concession Company (LCC), the firm managing the toll gate, Abayomi Omomuwasan and Gbolahan Agboluwaje, had earlier appeared before the judicial panel.

However, there was mild drama when the LCC officials refused to submit the CCTV footage of what transpired at the tollgate on Tuesday October 20, 2020.

Testifying at the panel, Omomuwasan who is the CEO of LCC confirmed that they are in possession of the video footage but refused to provide the footage, insisting he has to do so in the presence of his lawyer.

He however expressed the readiness of the firm to release the CCTV footage while the panel adjourned to Tuesday next week.

Watch a video of the panel leaving the military hospital below;

We Will Make Emigration Unattractive For Doctors, FG Vows