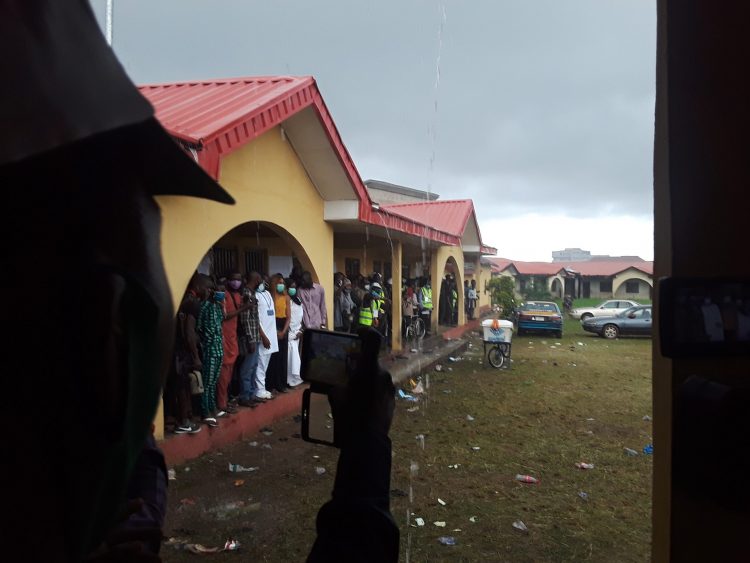 Heavy rain has disrupted voting at the polling unit of the PDP’s governorship candidate, Eyitayo Jegede.

Voters hid themselves as the rain poured out in torrent at polling unit 009, ward Gbogi/Isinkan 1, Akure South LGA.

PDP governorship candidate, Eyitayo Jegede, was also standing on the queue when the rain started.

Some of his supporters had pleaded with him to jump the queue to cast his vote because of the impending rain.

Mr Jegede however insisted he would stay on the queue but while the appeal was still ongoing when the rain suddenly came pouring down heavily.

The accreditation exercise as of the time of filing this report had stopped momentarily because of the rain.

However, those who were earlier screened for COVID-19 and checked were allowed to continue the process around the desk of polling officials where there is a protection from the rain.

Aides of the candidate had to escort Mr Jegede to a waiting vehicle when the rain made the area where they were standing uncomfortable.

A similar situation was reported in Owo earlier in the morning when torrential rain interrupted the process.

Owo is the hometown of the incumbent governor, Rotimi Akeredolu, while Akure is Jegede’s home.

Like in most parts of the Ondo during the voting, social distancing rule was ignored at Jegede’s polling unit.

From the entrance of the Sacred Heart Primary School, venue of the voting, the crowd encircled him and impeded his movement.

Journalists were also on him as they tried to take pictures of him and his wife.

APC, PDP Supporters Clash In Ondo Ahead Of Governorship…

Ondo: Why I Didn’t Pick Akeredolu’s Deputy, Ajayi As Running…