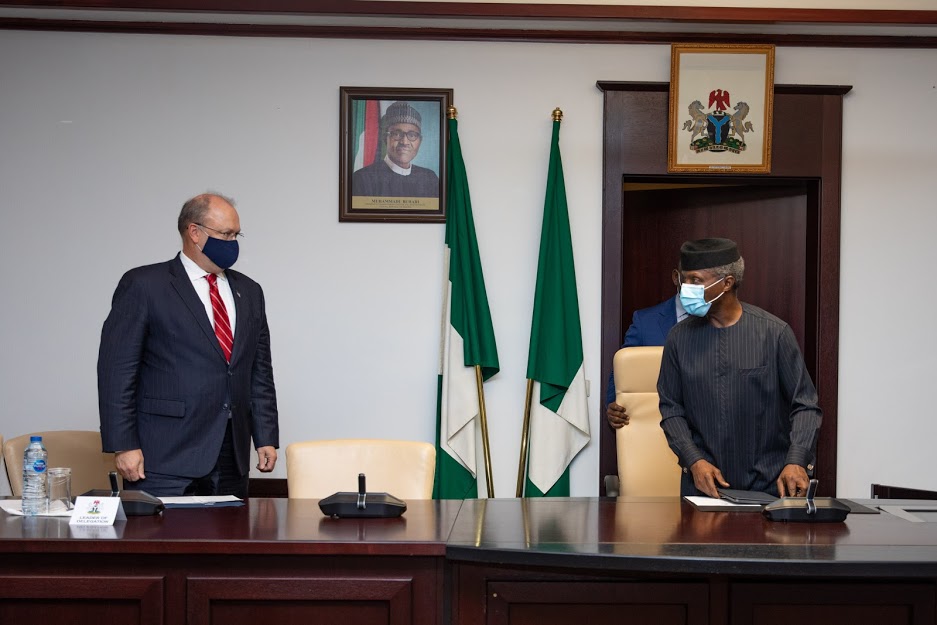 Vice-President Yemi Osinbajo has said the federal and state governments have introduced measures that will yield the “best possible results” on police reform in Nigeria.

Osinbajo spoke when he hosted a delegation from the United States government in Abuja on Thursday.

The delegation, led by Thomas Brechbuhl, counsellor of the US Department of State, visited him over concerns about abuse of human rights and violence during the #EndSARS protests.

Nationwide protests against the now-dissolved police special anti-robbery squad (SARS) metamorphosed into agitation for improved governance in addition to justice for victims of police brutality.

On Tuesday, men in army uniform shot at the young protesters while they converged on the Lekki tollgate, causing an international backlash against the government.

Laolu Akande, Osinbajo’s spokesman, quoted the vice-president as saying the plans introduced by the government to address recent developments would be “a game-changer in ensuring an end to impunity”.

Osinbajo was quoted to have told the US delegation that;

The concerns around impunity are some of the concerns that informed the establishment of Judicial Panels of Inquiry across states.

Each state is now required to establish judicial inquiry that will look into cases of impunity, excessive use of force, extrajudicial killings etc., especially by law enforcement agents.

Each State is also required to have what is called the Special Security and Human Rights Committee to ensure that law enforcement and security agencies protect the Human Rights of citizens.

Government is paying attention. The point we are making is that protests are a means to an end, but they cannot be the end. We are very optimistic that what we have put in place would eventually yield the best possible results for us.

I Was A Victim Of Police Brutality – Gov. Fayemi…