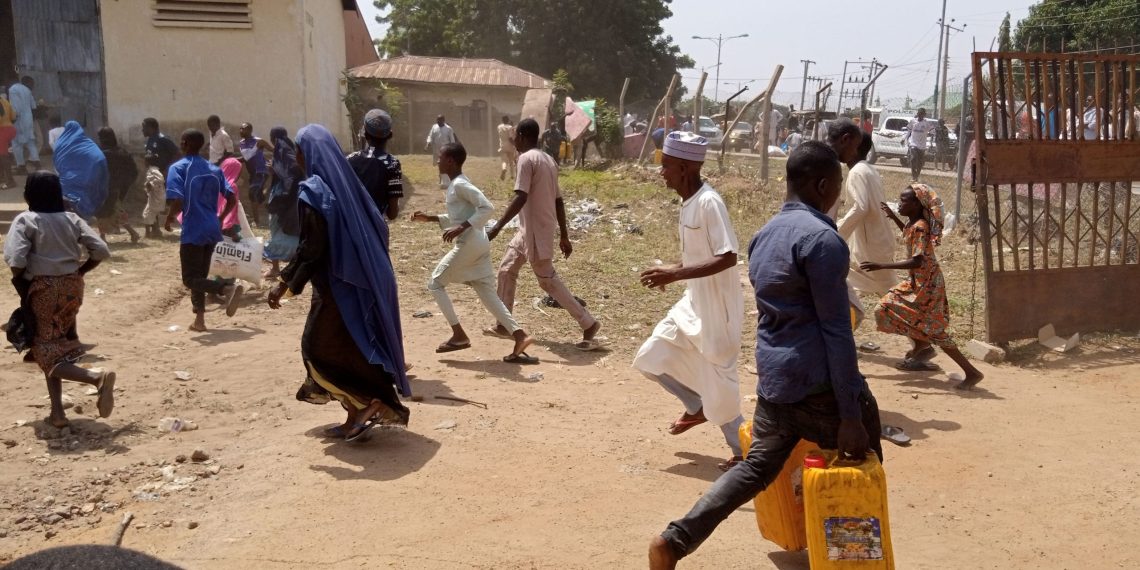 Residents of Kwana-Waya in Yola, the Adamawa State capital have attacked and looted a warehouse with COVID-19 palliatives on Sunday, October 25.

The looters broke into the food storage facility located at Kwanarwaya, near Sangere, along Numan road and stole food items.

In viral videos, many looters could be seen and heard calling on others to rush to the scene in order to get their share.

In another video, hundreds of people were seen stealing food items from the store, including rice, noodles and other assorted food items.

The people looted cartoons of Indomie, bags of rice, and other food items.

We have heard that hundreds of people have gathered and are looting foodstuff at a storage facility in Kwanarwaya.

We have mobilised policemen and are on our way to the scene in order to restore peace and order in the area.

The development started as a aftermath of the #EndSARS protest, that was hijacked by hoodlums after a government crackdown.

In reaction to this, Inspector-General of Police, Mohammed Adamu, on Saturday issued a stern warning against looters of public property, saying that the police will henceforth not condone such acts of breach, promising a clampdown on perpetrators.

If you are from Yola.. Go to Kwanan Waya and take your share.. But don’t forget.. YOU ARE A THIEF. 😂

Such a shame to the government!! pic.twitter.com/OQZYEyfUbD

“This is live in yola. see food(rice, milk, groundut oil, spaghetti and indomie). We will not vote all these governors in 2023, only zullum.”

Lamented a looter in yola. pic.twitter.com/hbl7SbRQ0P

Returning Looted Goods May Not Save You From Prosecution…

Two Women Trampled To Death Over COVID-19 Palliatives In…