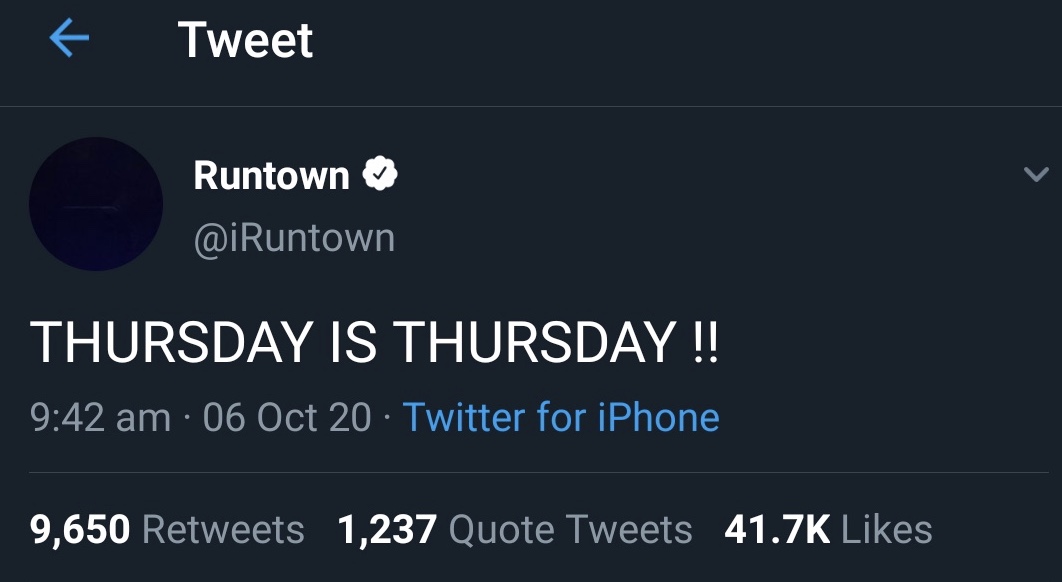 The tweet (pictured above) from the official Twitter handle of Nigerian singer and songwriter, Douglas Jack Agu, better known by his stage name – Runtown, on the 6th of October 2020 was all we needed to agree we were ready to fight for our lives as a people – Thursday is Thursday!

Thursday being the 8th of October 2020, a peaceful protest to end SARS (#EndSARS) began in Lagos, Nigeria. This was a protest peaceful enough to win the hearts of many and metamorphosed into a national movement to our brothers and sisters in diaspora. We knew it was time to demand for our right to live. OUR RIGHT TO LIVE, NOTHING MORE.

The movement defied all forms of barriers – religious, class, political interest, and tribe. The youths of Nigeria were united and with one voice, we asked that the dreaded unit under the Nigerian police force known as the special anti-robbery squad (SARS) be ended. The request seemed simple. On the surface level, the answer to our request seemed even simpler. The government responded, saying the unit (SARS) has been dissolved. 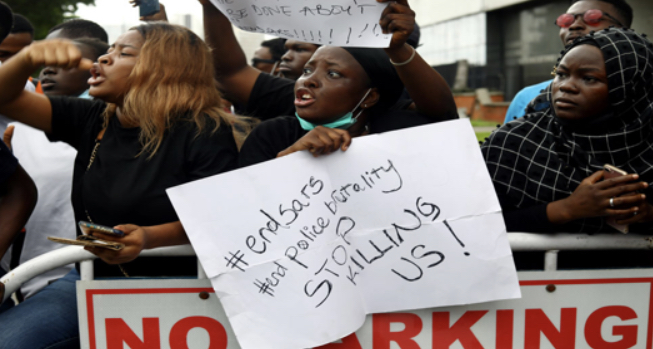 Fortunately, Nigerian youths are intelligent adults. They are not stupid. They can read and they have read enough to understand that the government does not care. The government had previously disbanded, dissolved, and decentralised SARS three times.

It was clear that such an announcement by the Inspector General of Police, Muhammed Adamu had become a routine response to the public outcry regarding the dangerous unit of the Nigerian police force called SARS. There is really no regard for human lives and the poor masses – the same people our politicians beg to vote for them. 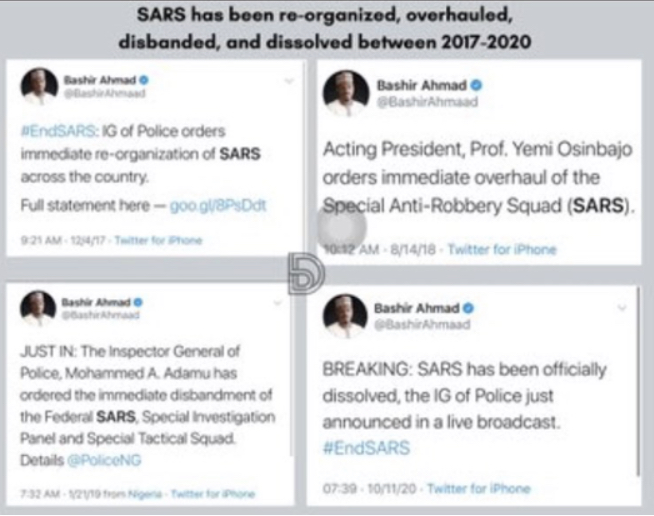 It was clear we needed to apply pressure but peaceful pressure. We needed our leaders to listen to us. We needed them to do one thing out of many issues we could have been protesting against – REFORM THE NIGERIAN POLICE FORCE.

A holistic reform of the Nigerian police force was all we asked for – better welfare for these men, better recruitment process, better psychological evaluation, better training, better working environment. Basically, we requested for what a security force should be. This birthed the 5 for 5 demand. Alongside that, we demanded an apology for the many lives lost. 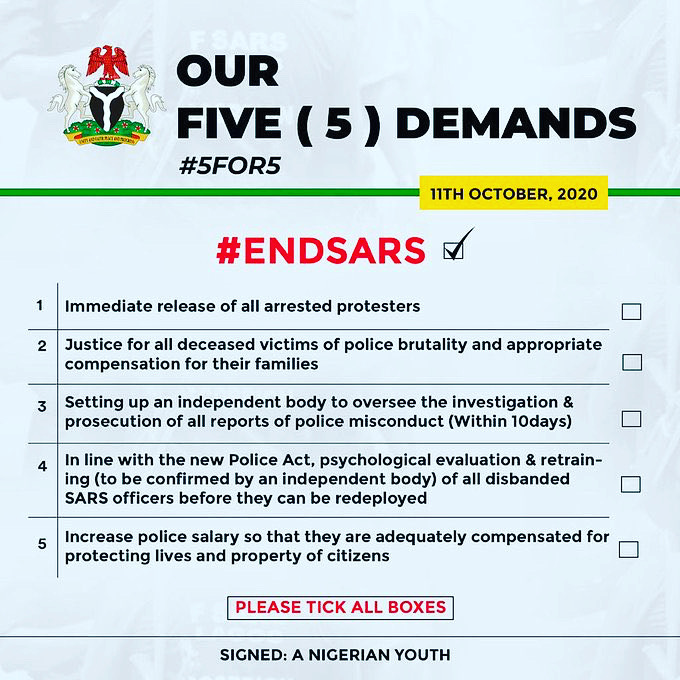 We got another response but this time, the oldest trick in the playbook of Nigerian politicians – creating panels and committee. All these were happening without a functioning governing council for the Nigerian Human Rights Commission (NHRC).

Nigerian youths pushed back, we did. We wanted more; we wanted practical results. We wanted to see the government working. We wanted the people we voted for to do what they promised they would do.

It didn’t take too long for them to reveal their true selves. They proved us right. They made it clear that we had every right to doubt them when members of the police force began to disrupt peaceful protests across the nation. They made it even clearer when they hired thugs to disrupt the protests.

We knew because they have played these right before our very eyes over and over again. We have video evidence showing government-owned vehicles transporting thugs. We saw state actors trying to plant discord among the youths but we were united, stronger than ever.

Alas, they used the very thing we fight against to attempt to destroy our will. This time, the military joined the police. It was a massacre. Let nobody tell you otherwise – the Nigerian government killed Nigerian youths. I am still in shock as I type. I am broken. There is something broken in me that cannot be fixed. But I am not destroyed. I am hopeful for a better Nigeria if only to ensure that the lives of our fallen heroes do not go in vain.

At this moment, I totally understand why we don’t have a clear picture of what happened during the civil war or the Biafran war, as many would rather call it. Silence and tears were and still are our parents’ coping mechanism.

Nigerian youths of today majorly adopted laughter as their coping mechanism on the 22nd of October 2020 after President Buhari hit the final nail in the coffin with the most insensitive, non-emphatic, heartless, and empty speech I have ever heard in my three decades of living.

Laughter and comic relief helped us stay together but 10 – 20 years or more down the road, many of us might choose silence and tears as well. Because how do I tell my children (if I ever get around having any), that our government massacred her people and gaslighted us? How do I even begin to share the story of the things I saw on DJ switch’s live Instagram session on the 20th of October 2020?

However, we are grateful for social media, for the ability to own our individual stories, for the ability to not be mentally destroyed by the same people who should care about our well-being. This story, albeit extremely sad, will not be distorted. My brothers and sisters were murdered; we have proof, and we know what we saw. We will not inherit the silence of our parents even if our minds want to. 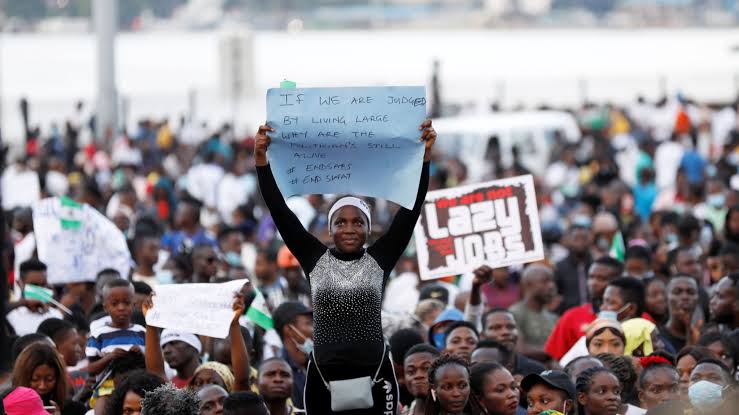 Nigerian youths are not lazy, not insane, not stupid. In my line of work, I have interacted with too many of them – people who are genuinely working hard, not just for themselves, or to enrich their pocket, but to create hope for their brothers and sisters.

The good thing so far from everything happening is that the youths of Nigeria are awakened to their interest in politics. Those who are not politically active now understand that they have to be involved. Our civil and civic duty is now very important and I’m glad we are here.

In case you haven’t found your political motivation, this is the time to find it. Get your PVC and be wise. There is no force more active than the youths in Nigeria in terms of voting. The fastest way to Canada is to get your PVC. We can build the Canada we desire by becoming even more responsible.

Anyway, with everything happening so far, I ask you this morning with a heavy heart, how are you? And I ask President Buhari; Who gave the order? 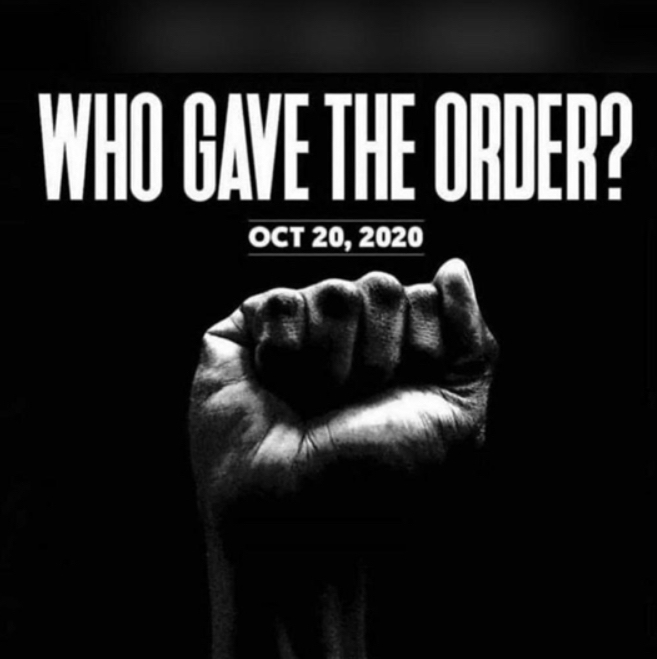