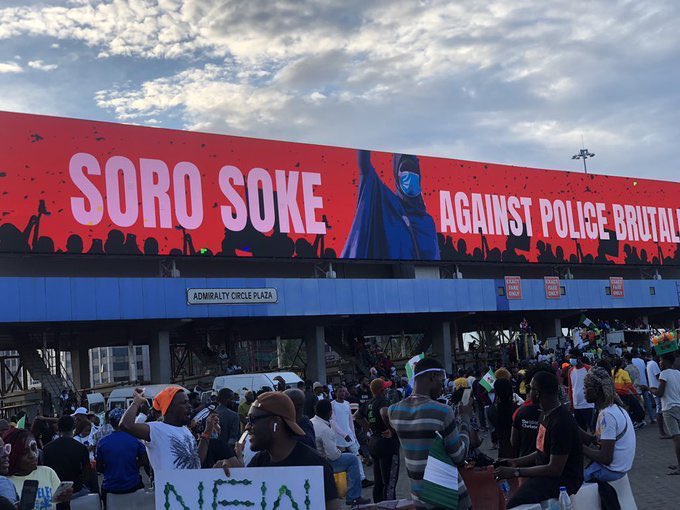 According to the allegations, Tinubu gave the order because protesters blocked the tollgate, which is said to be owned by the APC national leader, thereby causing him ‘lose money for days’.

For two weeks, thousands of #EndSARS protesters gathered at the Lekki tollgate and other parts of the state and country to peacefully protest against police brutality.

Due the protest, commercial activities at the tollgate were grounded as the place became the designated protest ground for Lagosians living on the Island, while claims that the tollgate belongs to Tinubu gained more popularity.

However, on Tuesday, October 20, 2020, some soldiers invaded the venue and shot at protesters, killing some and injured many others.

While the state governor, Babajide Sanwo-Olu said forces beyond his control were responsible for the attack on peaceful protesters, many accused Tinubu of sending the soldiers.

Reacting to this in a statement on Sunday, October 25, Tinubu expressed that he did not order the shooting or assault against anyone.

In a statement titled; ‘The #ENDSARS Protests; A Fundamental Lesson in Democratic Governance’, the APC national leader said;

I have been falsely accused of ordering the reported deployment of soldiers against peaceful protesters that took place at Lekki on 20 October 2020.

This allegation is a complete and terrible lie. I did not order this or any assault against anybody. I would never want such a vile thing to happen nor did I have any prior knowledge about this sad event.

It is my firm belief that no one should be harassed, injured or possibly killed for doing what they have the constitutional right to do in making their contribution to a better, more equitable society.

The former governor of Lagos State also debunked claims that the tollgate belongs to him, saying he has no ownership interest or involvement in the tollgate.

He called on Nigerians to conduct investigation into the ownership of the toll gate, stressing;

The slander aimed at me is based on the untruth that I own the toll gate concession. The hate mongers prevaricate that I ordered the Lekki assault because the protests had caused me to lose money due to the interruption of toll gate activity.

I ask people to thoroughly investigate the matter of my alleged ownership of the toll gate. By seeking facts, instead of being swayed by gossip, you will find I have no ownership interest or involvement in the toll gate.

There is no rationale that can adequately explain why I would order soldiers to repel peaceful protesters from the toll gate where I have no financial interest, yet, choose to do nothing to protect my investments in the Nation and TVC.

Tinubu, who confirmed that he is in investor in TheNation newspaper and TVC Communications, which were both burnt down by hoodlums on Wednesday, October 21, said the toll gate is a public asset.

In addition, he advised Lagos State Government to donate the toll gate revenue to the confirmed victims of soldiers attack at the tollgate and police brutality victims in the state.

The toll gate is a public asset. If it is reopened, revenues should be donated to the confirmed victims of the Lekki attack as well as to other identifiable victims of police brutality in Lagos.

Let government use the money to compensate and take care of those who have lost life or limb in the struggle for all citizens to go about the quiet, peaceful enjoyment of life without fear of undue harassment at this or that checkpoint.