Two Women Trampled To Death Over COVID-19 Palliatives In Abuja 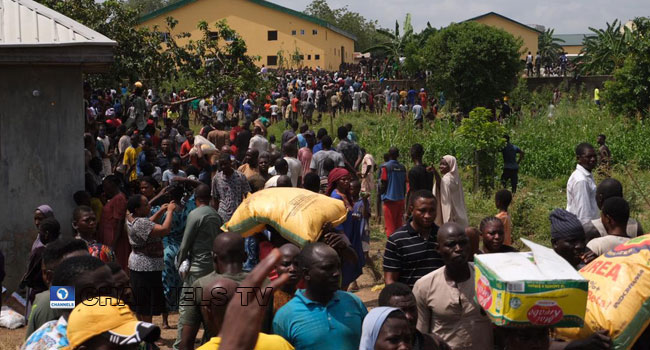 Two women have reportedly died on Monday in a vicious struggle for COVID-19 palliatives looted by hoodlums in a warehouse on the Secretariat road in Gwagwalada Area Council, Abuja.

According to reports, the women, like many others, ran to the warehouse after receiving information that some COVID-19 palliatives were stored there.

While struggling for the food items, they fell down and were trampled upon by the teeming crowd who were also fighting to collect their own items.

The palliatives were said to have included rice, salt, noodles, spaghetti and sugar, as well as other condiments.

Eyewitnesses expressed that attempts were made to revive those who fainted while the corpses of the deceased women were taken away by some residents.

An eyewitness, simply identified as Uhiene, stated that the process was smooth until around midday when it was disrupted by some impatient persons.

Another eyewitness, who preferred anonymity, said;

Getting into the warehouse was very tough and hard. I suffered some bruises, but glory be to God, I made it; because, it was not an easy feat.

Some are dying in there (the warehouse), others are suffocating, sweating. There was a woman of about 21 years that died inside. Another woman also died.

I saw them myself. They were stepped upon when they fell down (in the stampede). The women couldn’t stand up. They were trampled upon and killed.

One of the ladies was rushed to the General hospital in Gwagwalada where she was confirmed dead.

Meanwhile, the FCT Minister, Malam Mohammed Musa Bello, has ordered the arrest and prosecution of the people who broke the warehouse where CACOVID palliatives were being stored in Gwagwalada.

Subsequently, military personnel moved in to restore calm in the area while the FCT State Police Command was yet to speak of the attack on the warehouse, as at the time of filing this report.

Looting: Buratai Orders Military Commanders To Clamp Down On Hoodlums