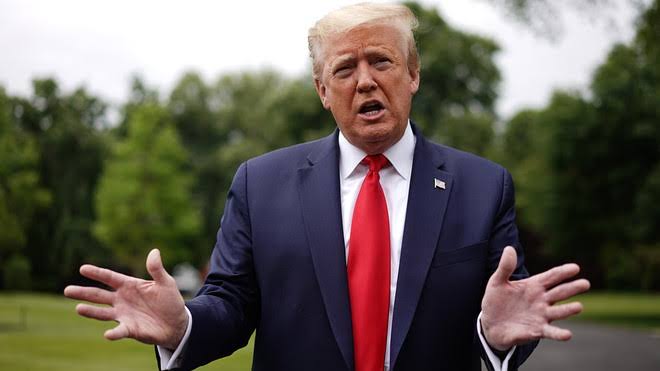 US President Donald Trump has said contracting COVID-19 was a “blessing from God” as it led him to the treatment he says left him feeling “perfect.”

Trump was hospitalised on Friday October 2, after testing positive for the virus. He returned to the White House on Monday, with his doctors saying he felt much better and stronger.

Read Also: COVID-19: Trump Returns To White House, Tells Americans Not To Be Afraid Of COVID

Trump however left despite concerns that he should be self-isolating, even as the virus continued to spread among senior White House figures.

In a video message shared on Twitter late Wednesday, Trump speaking from the Oval Office said that an experimental drug cocktail from Regeneron Pharmaceuticals was key to recovering from his infection.

Trump described how he “felt good immediately” after taking the emergency antibody cocktail, which he praised as a “miracle”.

I spent four days [at the Walter Reed Medical Center], and I went in and wasn’t feeling so hot, and within a very short period of time they gave me Regeneron.

And other things too but I think this was the key, but they gave me Regeneron and it was like, unbelievable. I felt good immediately.

I felt as good three days ago as I do now.

He said it was his suggestion to be treated with the drug, which has rarely been used outside clinical trials.

Regeneron, which was given to President Trump in an 8-gram injection last week, is an experimental drug that has not received emergency use approval from the US Food and Drug Administration.

The patient is injected with the drug, which contains lab-enhanced antibodies generated to mimic how the body would react to an invading virus.

The purpose of injecting the antibodies is to boost the body’s immune system so the virus can be destroyed.

Shares of the pharmaceutical company climbed to almost 5 percent after the president’s remarks.

President Trump in the video also declared that he would make Regeneron available to Americans sickened by the infectious disease at no cost, stressing;

I wanna get for you what I got, and I’m gonna make it free, you’re not gonna pay for it.

He also claimed that it was “China’s fault” that more than 210,000 Americans have been infected with COVID-19, as the virus was first detected in Wuhan province, China.

You have various other drugs that help a lot, but these, I view these – I know they call them therapeutic, but to me it wasn’t therapeutic – it just made me better. I call that a cure. I want to get them to the hospitals where people are feeling badly.

That’s much more important to me than a vaccine.

A MESSAGE FROM THE PRESIDENT! pic.twitter.com/uhLIcknAjT